3D Printing (also called Additive Manufacturing) is the name given to a process by which physical objects are created from 3-dimensional models. You can think of it as a copying machine that prints out objects in 3 dimensions. If you wanted to make your own plates, you could provide a digital model of a plate that is drawn on the x, y, and z planes to a 3D Printer and it will produce a real life plate for you.

3D Printing has been used in manufacturing for years. It has been very useful for the replacement of car parts. As the century moves on, experts expect 3D printing to have a dramatic impact on the United States economy. 3D printers will become cheaper, more reliable and more precise with constant innovations. The goal of many on the forefront of bringing this technology to the masses is for every household to have at least 1 3D printer. If this goal becomes a reality, it would affect countless industries. Instead of buying tables, chairs, cabinets, china, prostheses and a whole host of other physical products; people would be able to print out their own variations of these very common items and abandon purchasing them from retail outlets. 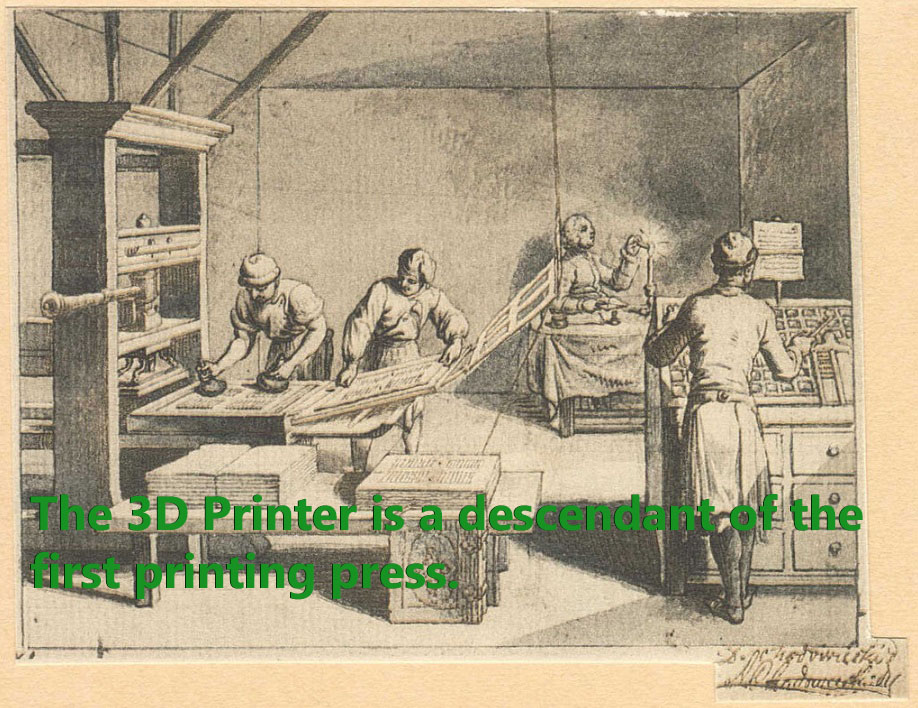 3D Printing became a reality in the early 1980s. There are 2 primary events that are widely accepted to be the driving forces for the 3D print movement. In Japan, an employee of the Nagoya Municipal Industrial Research Institute made the first significant contributions to this technology. Hideo Kodama invented the first fabricating technology and methodology for rendering plastic into 3 dimensions with a polymer that was exposed to ultraviolet rays. 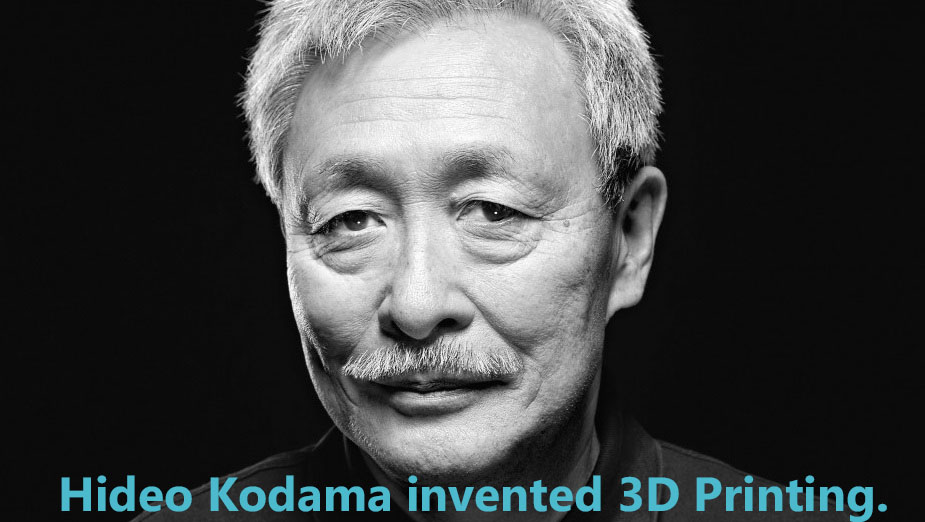 In 1984, an employee of 3D Systems Corporation, Chuck Hull, independently innovated a process by which objects could be rendered in layers. The technology appeared promising from the outset. Hull’s technique remains the foundation of most 3-dimensional printing machines to this day. It should be noted that Hideo Kodama is the first person to create such a process. Hull developed his applications independently, but he was not the first to do so. 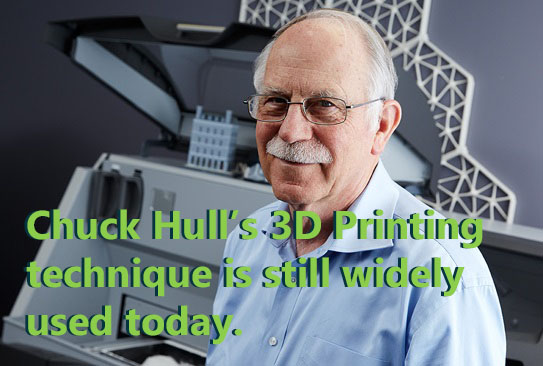 Businesses were unable to see a way to monetize the nascent technology at the time.  The early capabilities of these printers were quite limited. Throughout the 1980s and 1990s the possibilities were explored in educational institutions all over the world. By the 2000s, 3D printers had advanced to the point that they could not only form plastics, but metals as well.

Though Additive Manufacturing and 3D Printing are synonymous today, in previous decades the terms were not used interchangeably.  They were differentiated in the following ways:

1) Additive Manufacturing was the term preferred by professionals that generated 3-dimensional objects from digital drawings with metal.

2) 3D-Printing was used to describe models that were developed with plastics.

3D designs are brought to life with (CAD) computer aided design software (the most consistently precise technique that is currently available), photogrammetry software used in conjunction with a digital camera (this method is prone to produce errors in the final output) or a 3D scanner. 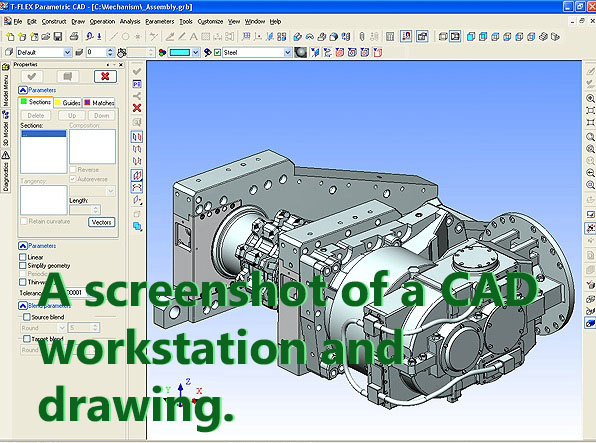 If there are any miscalculations in the modeling of the source material, there will certainly be print errors. Before anything is printed it is prudent to examine the virtual mockup and ensure that the output will be successful. Modern 3D Printing machines already possess software to perform this task before the print is executed. The method that is the most likely to result in print errors is 3D scanning. CAD drawings are the least likely to have such misconfigurations.

The output of 3D printers has moved into the field of health care. Many people are beginning to benefit from the invention of 3D printed prosthetics around the world. These prosthetics can be made for a fraction of the price of traditional prostheses. High quality commercial prosthetics typically come with a $5,000.00 to $50,000.00 price tag. Recently, a team of volunteers from e-NABLE produced a prosthetic hand for $50.00. Most models can be produced by a 3D printer in one day. Prosthetic limbs may take weeks or even months to come to full fruition.

The speed and price superiority of 3D printed prosthetics is particularly beneficial for children. Being that children grow at a rapid rate, the speed and cost efficiency of generating a prosthetic for a child makes this method a far superior choice for cash-strapped parents than pursuing standard prosthetic structures.

In 2014, a Chinese company named WinSun was able to build 10 houses in one day using a 3D printer. The houses were built using a giant printer and the primary material used was cement.

The ability to build 10 homes in one day astounded observers around the world. Another benefit of building homes with a 3D printer is that it spares the environment the damage caused by digging up blocks of stone and sawing them into pieces.

The printer also spares construction workers the dangers associated with inhaling some of the toxic dusts that pollute the air when a home is being built. The immediately apparent potential downside is that these printers may eliminate the need for many construction workers, thus placing downward pressure on local economies.

Orthodontic models and appliance designs are fertile ground for 3D printer capabilities to be utilized.

The addition of 3D Printing to an Orthodontist's toolkit allows their practice to control costs and increase efficiency. Orthodontists have combined forces to assist in the creation of 3D printing technologies that can be used to generate bonding setups, aligners and retainers.

A college student 3D prints his own aligners

In March of 2016; a digital design student at the New Jersey Institute of Technology, Amos Dudley, released photos of 3D printed clear aligners that he made for himself for only $60.00 . 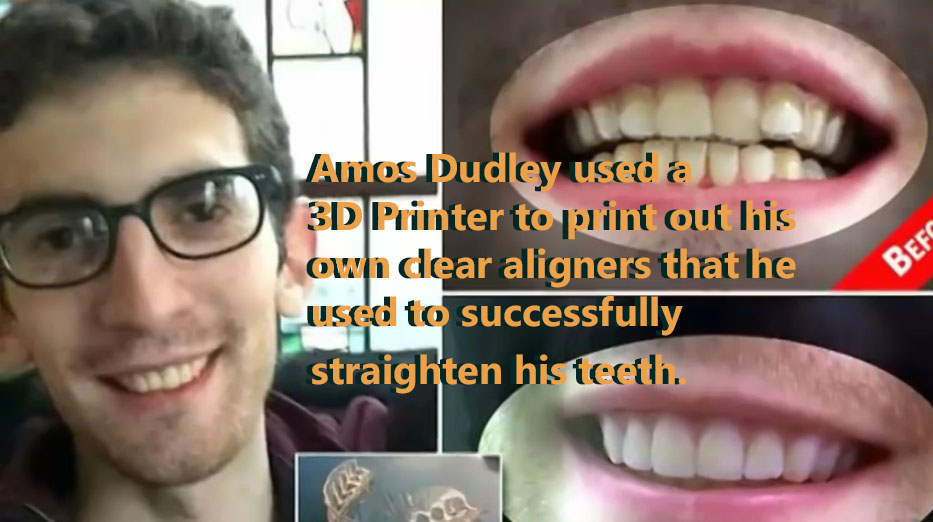 Mr. Dudley had already worn braces when he was younger. Like many people, he was not disciplined about wearing his retainer after his braces were removed. As a result, his teeth began to shift. He wanted to correct the alignment of his teeth without paying for orthodontic treatment again. His creative instincts were spurred by this and he used the state-of-the-art 3D printing technology that was available to him at his school to create his very own aligners. He wore his aligners for 16 weeks straight until the positioning of his teeth was thoroughly corrected.

Though orthodontists cried foul when presented with his self-made devices, he presented a timeline of pictures that displayed his progress from beginning to end to show that his apparatus worked and his teeth were not at all harmed at any point during the movement process.

Clearly, we have only witnessed the tip of the iceberg in terms of the applications of 3D printing technology in industry, healthcare and consumer use. If others take up Mr. Dudley’s flair for solving his own orthodontic problems without shelling out thousands of dollars, we may see a revolution in orthodontics that originates from the general public and reduces the roll of the orthodontist in the correction of mild orthodontic issues.