By the time that Arnold Schwarzenegger made the decision to run for Governor in California’s 2003 gubernatorial election, his political views were well known. Schwarzenegger made numerous high-profile appearances at large Republican events dating back to the late 1980s.

In 1985, he appeared in a public service announcement made in the form of a music video called “Stop the Madness”. The PSA was a music video that was produced under the aegis of the Reagan Administration. He became widely known as a Republican during the 1988 Presidential election. During this time he made an appearance at a presidential campaign rally with George H.W. Bush (Bush 41).

Schwarzenegger was by now a well-established box office megastar with worldwide influence. Being that he was so firmly entrenched in the Hollywood elite, he stood out for his political views. Hollywood is generally regarded to be populated with people that support left-wing democratic politics. The contrast to the views that he espoused and those of the rank-and-file Hollywood elite could not have been more stark.

Schwarzenegger was a Red Cross ambassador during the mid-1990s. He appeared in several commercial spots promoting the campaign to get more people to donate blood. He would use his celebrity to promote physical fitness and the well-being of others on many occasions.

Married to a Democrat

Interestingly, Arnold married a woman who hailed from a family of staunch Democrats. Maria Shriver’s mother was Dame Eunice Mary Kennedy Shriver. She was the sister of President John F. Kennedy. The Kennedy family is well known for having been the standard bearers of liberal democratic politics in the United States for decades. Maria continues to be a strong champion of democratic ideals. Her mother’s contribution to the politics and culture of the United States is legendary.

Eunice Mary Kennedy Shriver is one of the founders of the National Institute of Child Health and Human Development (NICHD). The organization is a branch of the United States Government’s National Institutes of Health. It was founded in 1962. She had long been an advocate for early childhood physical and cognitive development. The creation of the institute brought her passions to fruition in a meaningful way. The organization continues to exist to this day and has been responsible for many positive health outcomes in the country. Some of the most notable have been a huge reduction in per capita infant deaths and a better understanding of reproductive health and fertility. 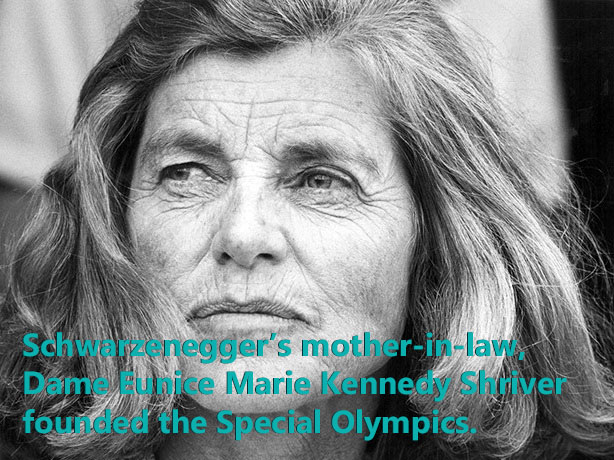 The same year that she co-founded the NICHD, Eunice Shriver launched a day camp known as Camp Shriver at her home. She was influenced by seeing her sister, Rosemary Kennedy, suffer from mental illness throughout all of her formative years. Eunice wanted to create a place where children afflicted with intellectual disabilities could play. No such environments existed prior to this time. Eventually, the camp was expanded to include children with physical disabilities as well. The event grew in popularity and prominence every year. She had found a way to serve a historically severely under-served population in a meaningful way. By 1968, the year that Schwarzenegger moved to the United States, the yearly event was not called Camp Shriver. It was now known as the Special Olympics. The United States Olympic Committee officially granted the Special Olympics permission to use the word “Olympics” in its’ title in 1971. 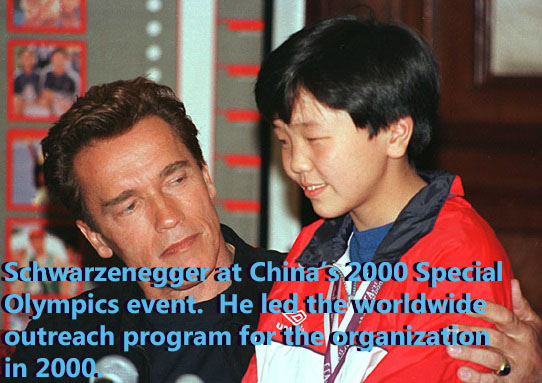 By 2001, Arnold Schwarzenegger was leading the Special Olympics initiative to extend its’ reach worldwide in order to find 6 million undiscovered special needs athletes. The cause became near and dear to his heart and he has been instrumental in increasing the worldwide prominence of the movement. Today the Special Olympics has mobilized countries around the world to take up the mantle of opening up athletic competition to individuals with physical and intellectual disabilities. The Special Olympics World Games are held every 4 years. As with the Olympic Games, there are winter and summer events.

Despite their strident political differences, Arnold and Maria were able to set their opposing views aside and capitalize on their respective influence to do good in the world.

(Somewhere around this time Schwarzenegger’s trademark diastema was closed. I could not find any picture of him after 2000 where his 2 front teeth were spaced apart.  The question as to how his teeth were brought together has never been answered.) 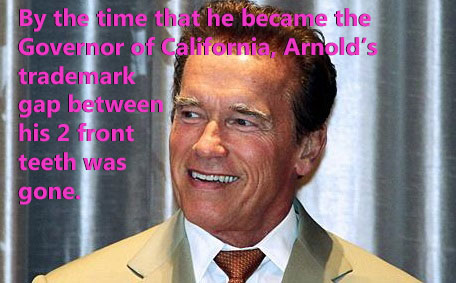 Seeds are planted for a new California Governor

As a result of the fallout from the implosion of the “dot com Bubble” in 2000 (among other things), California’s economy suffered greatly. The United States was experiencing an economic contraction at that time. California was especially hard hit. The situation was exacerbated by an energy crisis in the state. Many Californians saw their monthly energy bills rise by 300% in the 3 years following the economic downturn.

California’s Governor was Gray Davis. A Democrat, Davis was believed by many to be inept and corrupt in dealing with the state’s affairs. Davis penned his signature on deals with energy companies for prices that were greatly inflated and would continue for years to come. The actions of the companies were considered by the masses to be price gouging on a massive scale. Many residents simply could not afford to pay such incredibly high energy bills.

Additionally, Davis made a deal with the California Correctional Peace Officers Association that gave the appearance of corruption. Davis was constantly campaigning and accepting money from whatever donors were willing to contribute to his campaign efforts. The correctional organization donated $2,000,000.00 to the Davis campaign. Shortly thereafter, he leveraged his political power to have $5,000,000,000.00 in taxpayer money redirected to the CCPOA’s coffers in the ensuing years. Davis could not evade accusations of corruption and the calls for his dismissal rose to a fever pitch.

A recall election was proposed. An initiative and referendum procedure was put into place. A massive effort was started by Davis's opponents to make the initiative a success. After much effort, the initiative received the required number of signatures to put the question as to whether or not Gray Davis should be recalled on the ballot.

There were 135 candidates to choose from on the ballot. One of the names on the list was a world famous Austrian born professional bodybuilder, entrepreneur, actor and naturalized United States citizen who; prior to this campaign; had never run for office before. 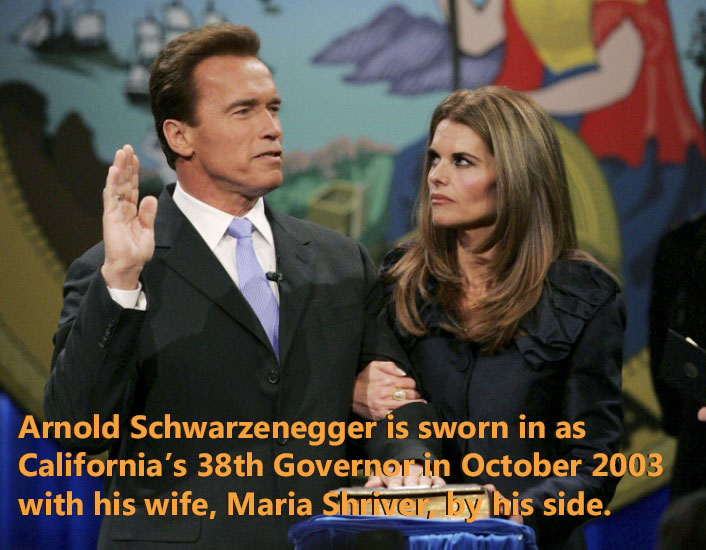