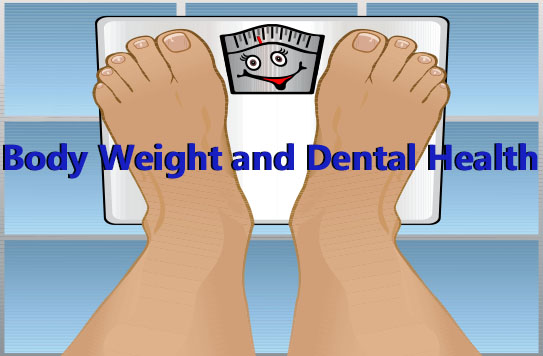 Your body weight can have a very strong impact on not only your overall health, but your dental health as well. It’s no secret that many countries around the world have seen the waistlines of their respective populations increase since the 1980s. One need only watch archives of television programming from a few decades ago to observe that the general population of the United States was thinner in the 1960s and 1970s than we are now. Unfortunately, this increase in body weight comes with the potential for some very negative consequences to the well-being and longevity of many millions of people.

Who qualifies as overweight?

The definition of who is or isn’t overweight is dependent on a person’s gender and age. For instance, women are healthy with a body fat percentage that is higher than what would be considered healthy for a man to carry. Older individuals are healthier when they are carrying around a bit more body fat than what is acceptable for their younger counterparts.

The table below shows the recommended guidelines for healthy body weight percentages for men and women ranging in age from 20 years old to 55 years old: 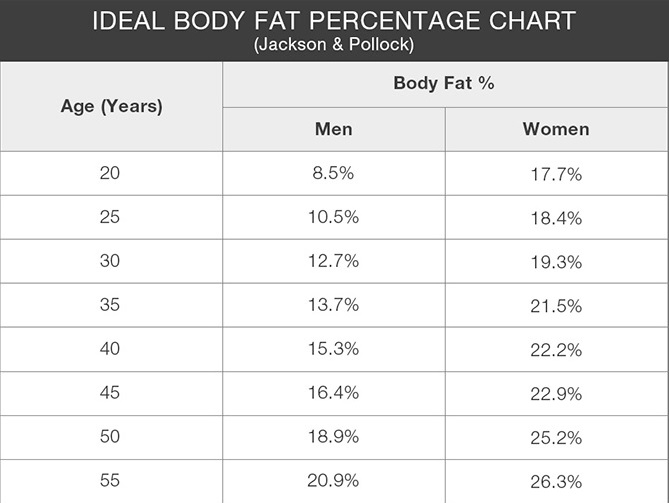 Being overweight increases the risk of developing a host of potentially lethal diseases such as:

Additionally, being overweight can hinder a woman’s chances of becoming pregnant and increases the risk of complications during pregnancy.

68.8% of people in the United States of America are considered overweight. Chances are that if you are reading this article you are overweight. I can relate to that, at 5’8” and 179 pounds, I am technically 15 pounds overweight. If I gain another 15 pounds I will meet the clinical requirements for obesity.

When we look around ourselves we see so many people that are overweight that we develop a skewed idea of what normal weight looks like. I can’t even recall the number of times that I have talked with a friend who meets the clinical definition of obesity that describes their physique as “man-size”. It is a grim reality that all of the meat that we have packed onto our bones is not actually meat, but fat.

Being overweight is mainstream in the United States. It is the new normal. Unfortunately, our acceptance of this has given rise to higher rates of childhood and adult obesity.

This is not just a problem in the United States. In many places around the world human beings have increased access to foods that are both nutrient-deficient and high in calories. 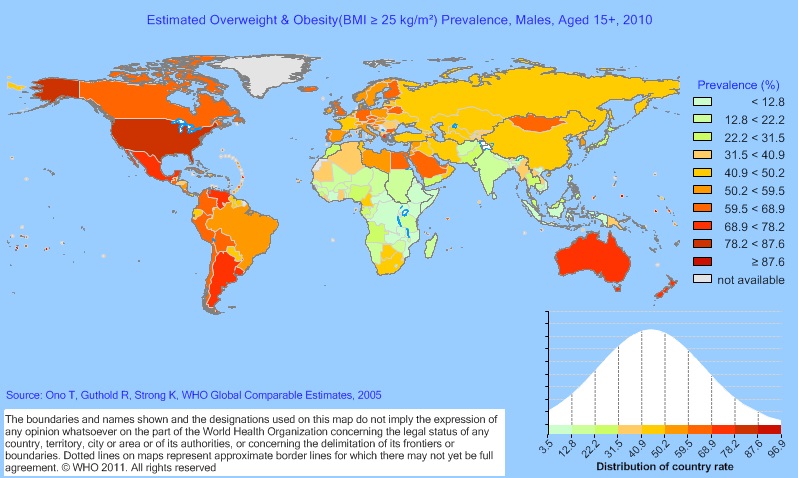 Who qualifies as obese?

A precise definition of obesity has been developed by the National Institutes of Health. A body mass index (BMI) that is 30 or higher meets the clinical definition of obesity. A person that has a BMI of 30 will be approximately 30 pounds heavier than their ideal weight.

According to the National Institutes of Health, 1 in 3 Americans is obese. During the 1980s the number was 1 in 6. The likelihood that a person will be obese has doubled in only 3 decades. The proliferation of readily accessible cheap and high calorie foods coupled with the sedentary lifestyles afforded to us by modern technology has combined forces to make our population far heavier than any other time in history. 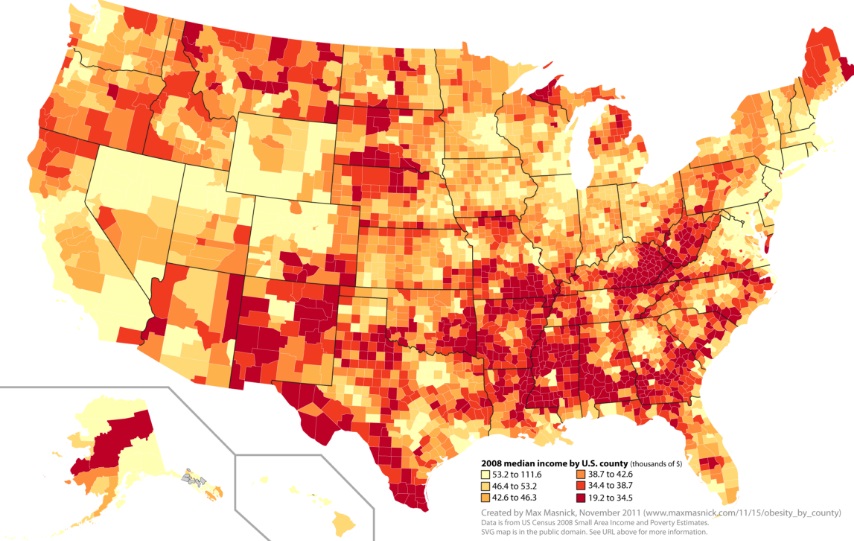 (The picture above shows a map of U.S. obesity rates by county. If you are familiar with the locations shown on the map you can see that our big cities tend to have far lower rates of obesity than our rural areas. People in cities tend to walk more than people in rural areas. For city-dwellers, many establishments are within walking distance. Bicycle routes are made available. Public transportation is encouraged as a method of travel. In many instances, it is faster and more convenient to take public transportation than to drive a vehicle. Do you recognize your county in the map above? In terms of obesity – How is your county faring?)

If you think that we are eating more than our United States ancestors did, you are wrong. Even many of the obese members of our citizenry eat portions that would pale in comparison to what our pioneers ate throughout the 1700s, 1800s and even much of the 1900s. Despite this, obesity was not an issue. This is because living was so labor intensive that an incredible caloric intake was required to keep up with the demands of day-to-day life. The average frontiersman consumed between 4,000 and 6,000 calories a day. 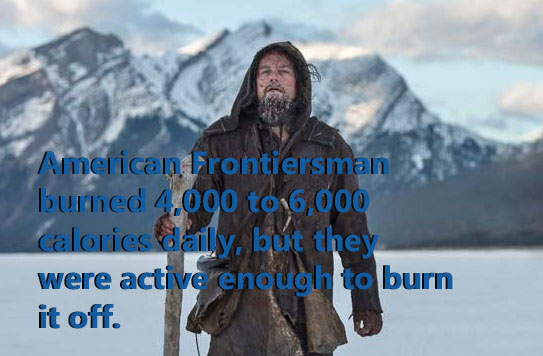 Since the 1980s, childhood obesity has more than doubled and the rate of obesity in adolescents has quadrupled.

The reason why obesity is such a problem for children is that during our formative years our body creates fat cells. Adults gain some level of fat cells, but nowhere near the amount that are created in childhood.  Adult fat cells increase and decrease in size as a result of food consumption and level of activity. Children who are obese are very likely to be obese as adults. Fat cells developed in youth never go away. The presence of these fat cells throughout life makes it more difficult for people that were obese as children to lose weight as adults. 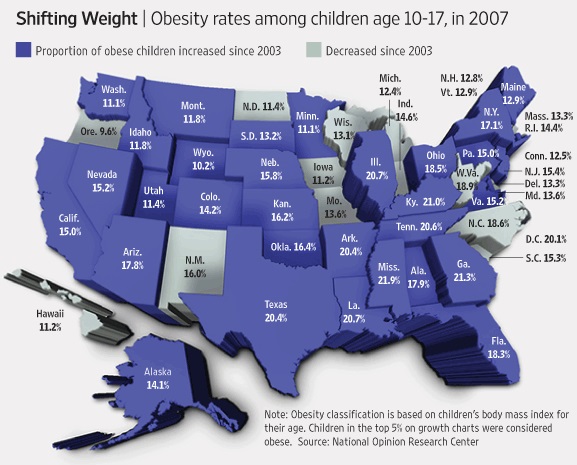 Many people are familiar with a constant cycle of weight loss and weight gain. This is because the fat cells that they have waged their valiant efforts against will never disappear. Even during cycles of weight loss the fat cells are always there, waiting to expand whenever caloric consumption exceeds physical exertion.

As the modern food industry extends its’ reach across the world the obesity epidemic has secured a firm grip on many other countries throughout the globe: 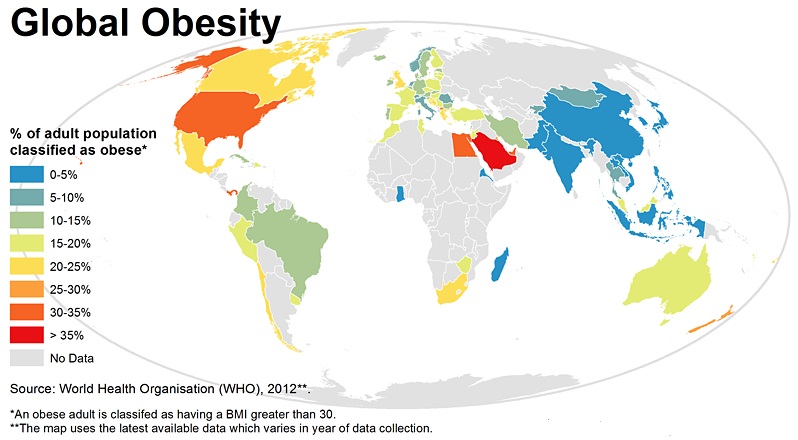 One of the primary consequences of being overweight is a pronounced increase in rates of high blood pressure and diabetes.

Diabetes is a metabolic disease. When the body is unable to produce insulin in sufficient quantities it causes levels of glucose in the bloodstream to rise. Diabetes is actually a group of diseases that join forces to wreak havoc on the human body from a multi-pronged approach.

Some of the consequences of diabetes are

380 million people around the world have diabetes. According to the World Health Organization, that number will double by 2030.

In the last decade the incidence of diabetes in the U.S. population as risen an incredible 50%. Current estimates indicate that 29.1 million people living in the United States have diabetes. Of those, 1.25 million people have type 1 diabetes (type 1 diabetics are born with the disease), approximately 20 million are diagnosed with type 2 diabetes and an estimated 8.1 million are afflicted with the disease but are completely unaware because they have not been diagnosed.

1 U.S. citizen dies of complications due to diabetes every 3 minutes. 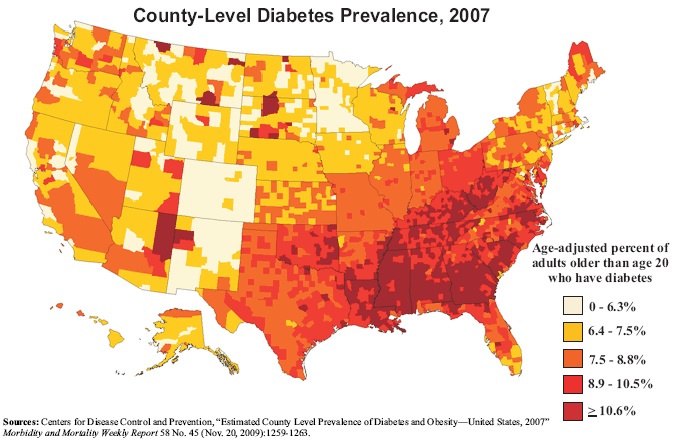 People with diabetes have an increased incidence of gum disease (periodontitis). This is a condition that causes the gums to pull away from the teeth, thus allowing infectious agents to destroy the bone that surrounds the teeth.

As a result, diabetics are at risk of losing their teeth if their periodontal disease is not managed through managing their illness, engaging in optimal oral hygiene practices and attending regular dental checkups.

Being that the modern trend toward being overweight or obese is so pronounced, it is in the best interest of all of us to fight consistently in the battle of the bulge in our waistline. You might say that we can either lose weight or lose our teeth. 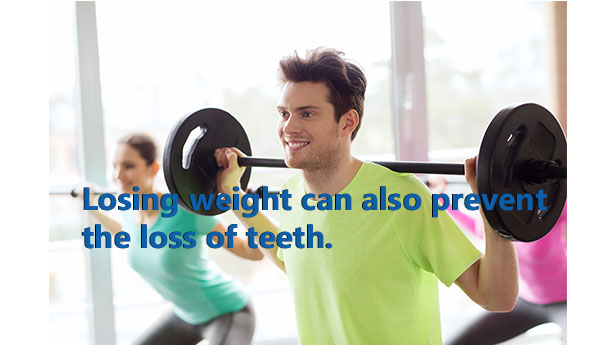