European Early Modern Humans (or Cro-Magnons, as they are commonly called) were early modern humans that lived in Europe from approximately 50,000 years ago to 10,000 years ago. The first fossilized Cro-Magnons were found in 1868. They received the moniker Cro-Magnon because their remains were initially found in Cro-Magnon, a village that lies just outside of Les Eyzies, France.

During the reconstruction of a road, construction crews happened upon a limestone cliff with an embedded rock shelter. The shelter appeared to be ancient and there was evidence that the contents of the space were organized by intelligent life. When researchers arrived to investigate further they found signs that the area had been occupied. There were bone fragments, the remains of an infant and 4 skeletons that were consistent with the size of fully grown adults.

The scene had the telltale signs of an intentional burial site. The bodies were adorned with primitive jewelry. There were necklaces and pendants that were apparently fashioned from animal teeth. The find is one of the oldest known collections of early human remains known to the world. The fossils were very old, dating from 30,000 to 32,000 years ago.

The most famous remains that were excavated from the site were those of Cro-Magnon 1, a male who was somewhere around 50 years old at the time of his passing. The physical remains of he and his cohorts showed evidence of a life that was physically very hard. His facial bones were disfigured. Several of his companions had fused vertebrae in their necks; this indicated that they recovered from serious injuries. One of the females was found to have a fractured skull that she was apparently able to live with for some time before her expiration.

The fact that these remains showed evidence of having healed from traumatic injuries showed that Cro Magnons worked in groups to care for each other. Such recoveries would not have been possible for one to achieve of their own accord. We are not able to know just how far their circle of empathy reached. Despite this, it is easy to ascertain that Cro-Magnons looked after each other in some form of group capacity. 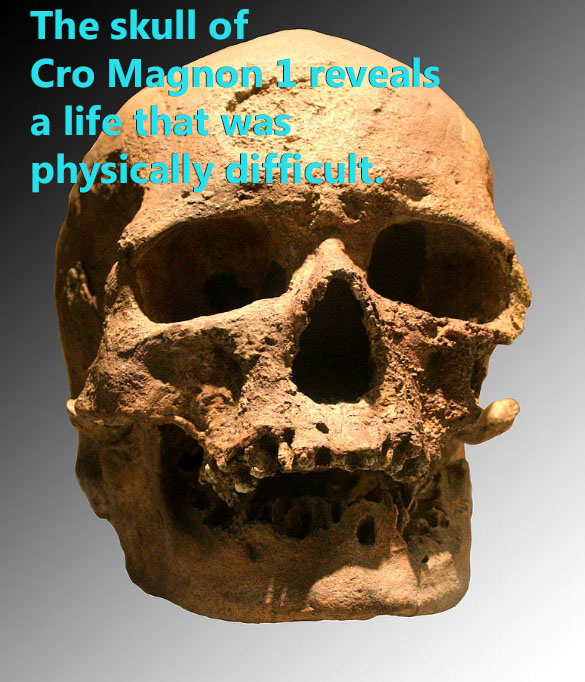 (The skull of Cro Magnon 1. The pock-marks in his face are from an infection that caused his facial bones to be disfigured.)

Earliest known example of our species

A common misconception is that our species is descended from Neanderthals. This is entirely untrue. Though there is some evidence of the interbreeding of our distant ancestors with Neanderthal; we are not descended from that species. The genetic material that remains in the DNA of the modern populations of humans that reflect this interbreeding show that those genes do not comprise the functional makeup of their physicality. From a gene perspective; these markers are genetic junk.

Homo Sapiens Sapiens originated as Cro-Magnons in Africa approximately 200,000 years ago. Though this finding has been controversial, the latest anthropological evidence very strongly supports that conclusion .

The earliest samples of Cro-Magnon remains date back to somewhere around 195,000 years ago in East Africa.

Though Cro-Magnons were very anatomically similar to Homo Sapiens Sapiens; if you were to see one of these humans in your vicinity, you would immediately know that he or she had different physical characteristics. 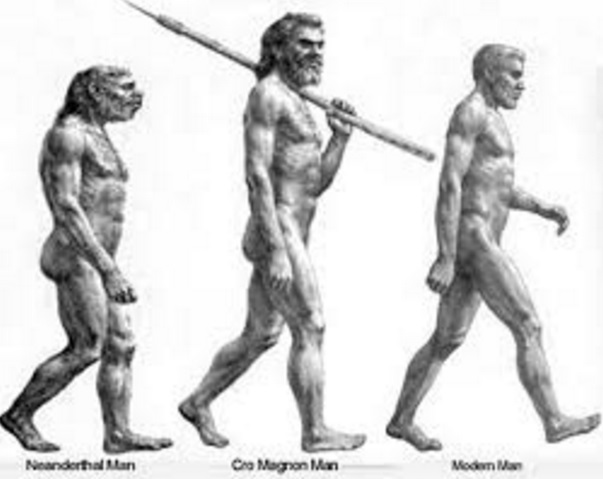 Cro-Magnons were much stronger than present modern humans. Their bodies were heavier than ours and they had incredible musculature. It is unlikely that we would be able to best them in any contents involving physical strength. 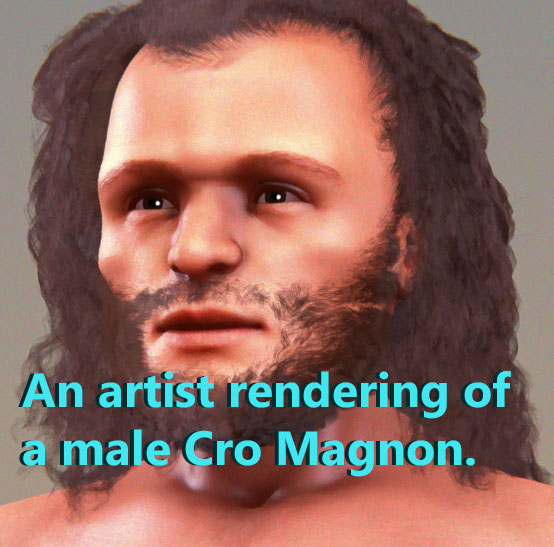 (An artists’ rendering of a male Cro-Magnon. Notice the wide facial features and prominent chin. It is a marked difference from the sloped forehead and recessive chin of the Neanderthals.)

They also had straight foreheads and strongchins. They did not have the pronounced brow ridges that are a well-known physical characteristic that Neanderthals possessed.

Compared to our facial features, their faces were wide and short. 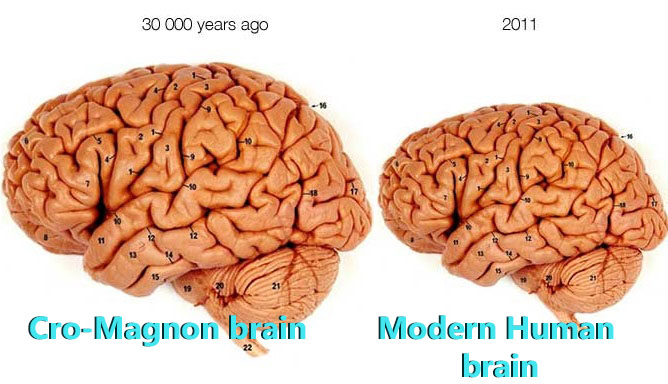 Cro-Magnons had a smaller cerebellum. This is the area of the brain that is associated with language and motor skills. Thus, it has been posited that they lacked the ability for intricate expression that we currently enjoy. Despite this, Cro-Magnons were capable of a substantial degree of abstract thought. This is evidenced by the art that they left behind.

The Cro-Magnons produced some remarkable artwork. Actually, they produced the first known artwork of all time. Preserved pieces that members of their species produced are truly breathtaking. The production of art is the most succinct indicator of the ability to think abstractly that we currently know of. A few of their incredible pieces are shown below: 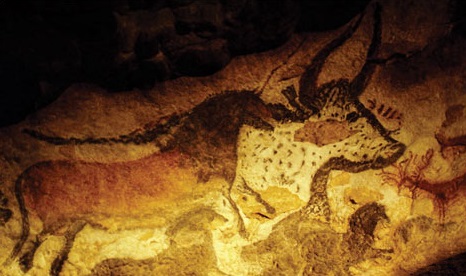 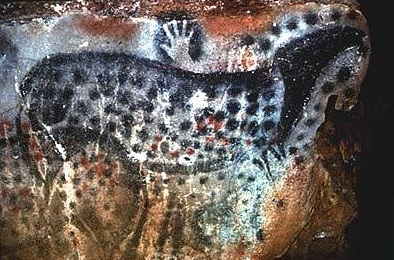 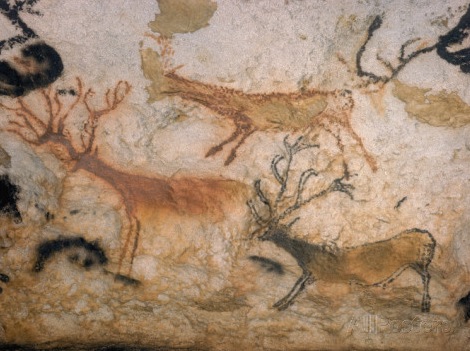 Cro-Magnons are, anatomically speaking, exactly like us. Their teeth looked very similar to ours. They had central incisors, lateral incisors, canine teeth, bicuspids and molars in their maxillary and mandibular jaws. The only difference is that due to their larger physical size; their teeth were notably larger than ours. 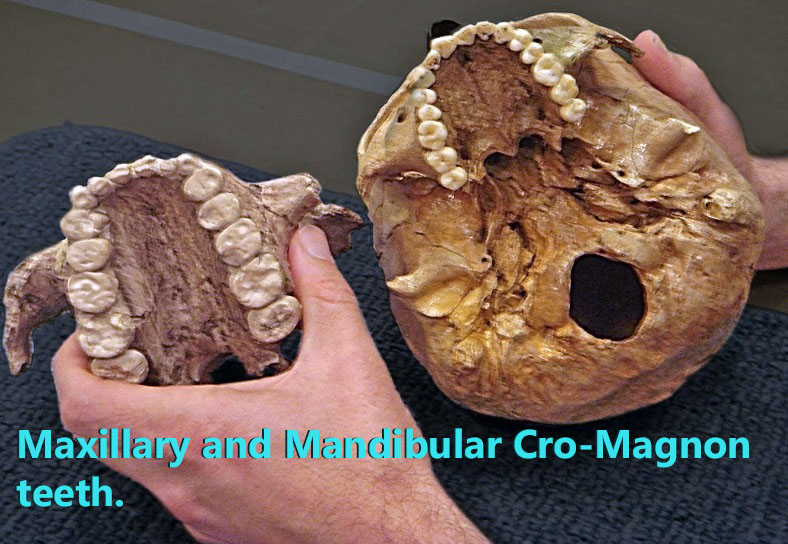 Though Cro-Magnon is the name applied to these early humans, they were actually very much like us. In fact, unlike Neanderthals, Cro-Magnons and modern humans are the exact same species. For this reason, anthropologists call Cro-Magnons by a different name: Early Modern Humans.

These ancient ancestors exhibited early forms of the behaviors that we commonly associate with human beings today. Some of these are:

-Using technology to accomplish their goals

-Caring for their sick

We owe a lot to our early ancestors. They set the stage for the success that our species enjoys today.  Though they could never have imagined the world that their descendants would go on to create; we owe our forebears an immeasurable debt for setting the stage for our survival and accomplishments.