​Do Dentists get kickbacks from other Dental Professionals? 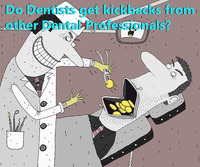 Way back in 1995, I went to a dentist’s office for a routine checkup. This was not my regular dentist. At the time I was interning in Chicago for 6 months. I’m originally from New York City. I was 21 years old; I had never had a cavity before in my life and I had no cause for trepidation about my dental visit. My regular examination schedule required that I be observed by a dental professional every 6 months. It just so happened that this time frame coincided with the time that I was away from home.

I followed all of the rules with regards to preparation of my mouth for observation. I brushed my teeth, flossed and rinsed thoroughly before leaving for my appointment (for the record, I do this at least twice a day regardless of whether or not I have a dental appointment). I even took the extra precaution of chewing sugarless gum to get enough saliva generated to break down any additional foreign substances in my mouth.

When I arrived at the office I told the receptionist that I was fairly confident that my teeth were in good shape; however, I wasn’t 100% sure. In response, she asked me to show her my lower teeth. I complied with her request. Much to my delight, she nodded her approval. She said, “You have nothing to worry about. You keep your teeth very clean.” It was nice to get a compliment for the outcome of my daily teeth cleaning efforts. I sat in the waiting lounge and waited for my name to be called from the examination room.

After my name was called, I proceeded into the patient chair at the center of the exam area. I was introduced to the dentist. To be honest, I didn’t have a good feeling about him. He seemed as though he could hardly be bothered to exchange greetings with me. He wasn’t exactly rude; but he wasn’t polite, either. It is difficult to explain his exact mannerisms. I can only tell you that his presence was a bit unsettling. 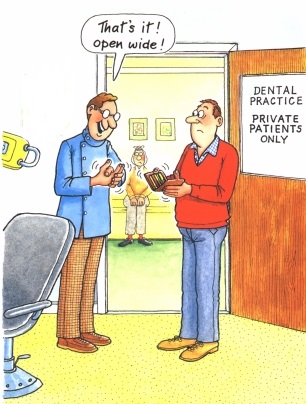 I had no history with this particular dentist. As such, He had no dental records to view before cleaning my teeth. My records were unremarkable up to that point. As far as I knew, my teeth were in great shape.

When I sat in the examination chair in the center of the room he began a long observation process of my oral cavity. I had never had a dentist take such time and effort with me before beginning any work on my teeth. He gave several quizzical looks and his face started to become very serious. He took X-Rays of my oral cavity for a more in depth review.

My confidence in the condition of my teeth began to give way to concern with every facial grimace and look of concern that he expressed. He told me that he would begin the process of cleaning my teeth but after he was done there was something that he wanted to talk to me about.

The cleaning went by without incident. After he was done he brought my X-Ray’s over. I have never been able to make heads or tails of a dental X-Ray. That is probably the case with most patients. He took time to explain the pictures to me. He told me that my teeth were in good condition and I had no cavities. However, there was a troublesome finding that could lead to problems in the future.

He told me that my wisdom teeth were erupted. My wisdom teeth were mildly troublesome to me. When they emerged from beneath my gum line, I could feel soreness from the way that they tore through my gum flesh as they rose upward to join the rest of my teeth. The dentist told me that the problem was that all of my wisdom teeth were being prevented from coming completely through the gum line because a portion of them were stuck beneath the molars that were directly in front of them.

I told him that I wasn’t experiencing any adverse effects from this. The rear portion of my gums were sore from time to time; I assumed that was the way that it felt to most people when their wisdom teeth began to fully develop (it is). He told me that it was not unusual for a person not to feel anything out of the ordinary during this time. Still, he said that the “impacted” (a term he used to describe the way that a portion of each of the teeth was stuck beneath the teeth that were directly in front of them) wisdom teeth would eventually cause all 4 molars that were blocking their emergence to crack. I would end up having to have my wisdom teeth and the 4 molars directly ahead of them removed. I would also have to endure dental surgeries and years of expensive periodontal treatment to monitor and repair the damage that would follow in the aftermath of this catastrophic event.

When I asked him what the time frame was for this to happen, he responded “It could be in 2 days, 2 weeks, 2 months or 2 years; but it will happen.” (emphasis his). His face was very serious. It felt as though he was going to great lengths to stress the gravity of the situation to me.

He gave me the business card of a local dentist that could perform the surgery to extract my wisdom teeth. He told me that I should call this Dental Surgeon as soon as possible to avoid all of the problems that my wisdom teeth would cause me.

I was extremely skeptical of his wild prognostications. Several questions raced through my mind:

Additionally, I did not particularly care for this dentist on a personal level. There was something about him that rubbed me the wrong way. Upon our introduction he did not seem as though he was happy to have me as a patient. It seemed more like he could not wait to be done with me so that he could move on to more important things. The dental cleaning that he gave me did not strike me as being very thorough. All in all; I felt that he was just going through the motions because it was his job to, not because he was passionate about his profession.

When I left his office I put the Dental Surgeon’s business card in the glove compartment of my car. I drove off, finished my internship a few months later and was happy to see that all of my teeth were completely intact for my return to school.

Once back at school, I went to my regular dentist and told him what the other dentist had related to me. He was emphatic that there was no way that any dentist could predict with absolute certainty that my wisdom teeth would cause my 2 nd row of molars to crack. He responded with incredulity when he heard all of the details of the story. I was relieved that my instincts about the other dentist were correct and that I did not follow up with the Oral Surgeon that he recommended.

It would take another few years for my wisdom teeth to fully form out of my gum line. Today, 21 years later, all of my teeth are perfectly healthy. There are no cracks in any of my teeth and I still maintain a cavity-free set of teeth. I always felt as though the dentist that I went to all of those years ago must have received some sort of kickbacks for directing patients to the Oral Surgeon that he recommended. His outrageous conclusions could not possibly have come from any sort of professional methodology for observations. 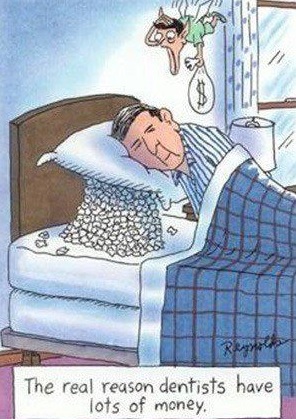 I have no concrete proof that there was a monetary incentive that spurred my one-time-dentist to make such an incredible prognosis.  Perhaps the Oral Surgeon that he recommended was a friend of his and he was just doing him a favor.  Whatever his reasons for attempting to influence me to have surgery, I am completely convinced that they had nothing to do with what was in my best interests.