My time with braces: Part 2 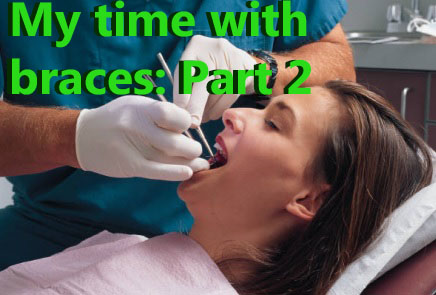 After a couple of weeks of waiting, I was called back into the orthodontist school to begin my treatment. I was very eager to get things started. It seemed as though I had waited my entire life for this to happen. I remember being fixated on making sure that my teeth were clean and my breath was totally fresh. I flossed, brushed my teeth, gargled with mouth wash and chewed mint flavored gum the entire way to the office.

I still wasn’t going to receive my braces. In order for the protrusion in my teeth to be eliminated, I had to have my first row of bicuspids removed. There was 1 doctor and one assistant (I don’t know what the exact name of her position was).

I asked them if I was allowed to keep my teeth after they removed them. I was young and really thought that they may have had a claim on my teeth because they were performing surgery to remove them. I know now that I had every right to keep my teeth after they were dislodged from my gums. Before the assistant could answer, the doctor replied, “No. We keep your teeth.” I accepted his answer. Of course, in hindsight, I wish that I would not have taken his answer as gospel.

They informed me that I would be receiving localized anesthesia in my gums. The doctor told me that the exterior gum area possessed fewer nerve endings than the interior of the gums. He gave me fair warning because they would be injecting the anesthetic directly into my gums. When the needle went into the exterior of my gums I recall thinking that it was far less painful than I expected it to be. When the needle was inserted into the interior of my gums, I immediately understood what the doctor meant when he said that there were more nerve endings in this area than in the exterior gum line. It was painful. However, the sensation of pain passed within a few seconds. The needle was removed and the novacaine quickly went to work. Within a couple of minutes my mouth was completely numb.

I was awake throughout the entire procedure. They took a tool that strongly resembled a pair of pliers and used it to remove the 4 bicuspids just behind my front row of teeth. There was a crunching sound every time the doctor gripped one of my bicuspids, twisted them back and forth and pulled them out. Once he was done removing the 4 teeth his assistant filled in the newly empty spaces with gauze.

My mouth was still numb and I was unable to talk. I was told that as the numbness started to fade away, I would begin feeling pain. I was briefly assessed to be certain that I was in good enough condition to go home on my own. I did not take my car to the procedure because I anticipated driving prohibitions while under the influence of the novacaine. I was allowed to leave. I remember getting into an elevator to go down to the main lobby. There was a woman inside of the elevator that saw the gauze sticking out of my mouth and immediately started laughing. It was extraordinarily rude! I arrived at my home approximately 1 hour later. With my first row of bicuspids gone, I had a huge gap between all of my Canine Teeth and my second row of bicuspids. I made a point not to smile at all. My next appointment was in 1 week. I could hardly wait.

At my next appointment, I met with the orthodontic student who would conduct the entirety of my treatment. He was a young man in his mid-twenties. He said that today they would be putting buffers between 2 of my molars in order to create room for anchoring the orthodontic apparatus to my teeth. He said that there would be nothing further done during the visit.

He wedged neon blue buffers between my 1 st and 2nd molars on the top, bottom, right and left sides of my mouth. I was a bit disappointed that this was the only thing that would be accomplished on that day. Later on, I would be very happy that he did not take that portion of my treatment any farther.

I went home and told my friends about the buffers. Most of my friends had braces in the past, so they knew exactly what I was talking about. One of my friends asked me, “Aren’t you sore?”. I said that I wasn’t sore at all. He looked at me quizzically in response. Sure enough, about 4 hours later the area of my gums immediately surrounding my molars began to feel very sore. It was impossible for me to bite down on anything with my molars. The pain that resulted was unbearable. Brushing my teeth was an agonizing experience. Simply moving the bristles across my teeth caused an earthquake of pain to reverberate through my entire gum line.

The soreness subsided significantly by the 4 th day. It went away entirely within one week. I was thankful to again be able to eat solid food without experiencing any pain.

1 week after the buffers were placed, I returned for my follow up appointment. This was the longest appointment that I would have with the exception of the procedure to remove my braces.

Mr. Goldberg, the orthodontic student that was in charge of my treatment, prepared me for the length of my appointment before I arrived. I would be in his office for hours. My procedure was performed in an open area along with a half dozen other patients. In the dental school, these procedures were done in the same area so that the professor could go from student to student and survey their work.

He inserted a device in my mouth that kept my lips wide open. He seemed a bit anxious, but eager to take on my case. He removed the buffers from between my molars and inserted metal rings in their place. There was an adhesive that he applied to the sides of my molars before he connected the rings with my wisdom teeth. With his professor looking on he began the work of applying the adhesive to the rest of my teeth in order to bond my braces to each independent tooth. I was nervous but very happy to be on my way. 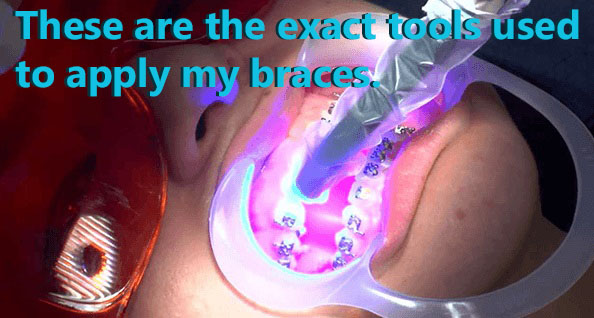