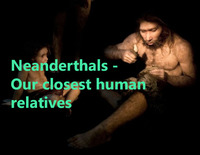 Neanderthal (Homo neanderthalensis) is one of several known human species that roamed the Planet Earth from 300,000 years ago to 30,000 years ago. Research has shown that there was a time when our ancestors lived side-by-side with Neanderthals. Contrary to popular belief, we are not descended from the Neanderthals. Our ancestors are the Early Modern Humans (or Early Anatomically Modern Humans – popularly known as the Cro-Magnons) . Neanderthals were thought to be nothing more than vicious barbarians for a long time. However, the analysis of the physical evidence that they have left behind has continued to reveal new insights about our nearest relatives. Neanderthals engaged in several activities that can be associated with higher levels of intelligence. Neanderthals: 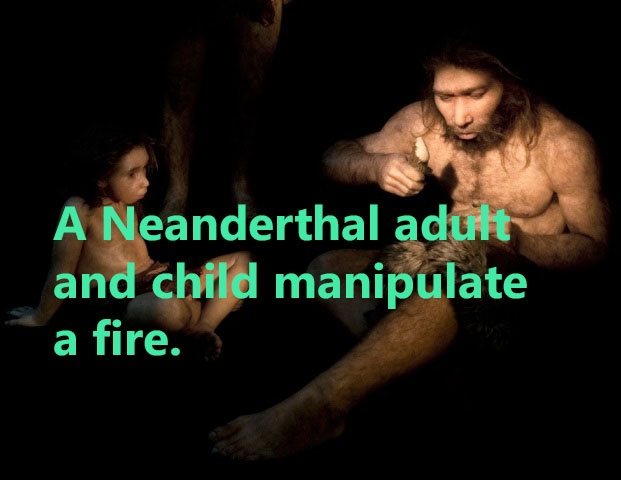 Very recent research into Neanderthals have led to the conclusion that their societies were far more complex than originally thought. A key factor in the progress of a society is the complexity, scope and scale of collaborative efforts.

The first Neanderthal remains were discovered in 1856 by men working in a pit. The workers did not know what to make of the bones that they found. They originally thought that the bones belonged to a bear and gave them to a local teacher. The teacher ensured that the bones were given to scientists that he was acquainted with. The sample that he provided them was comprised of 16 bones. Upon scientific analysis, the scientists concluded that the bones came from ancient human beings.

Like us, Neanderthals got their start in this world on the continent of Africa. They migrated to Eurasia long before our ancestors made their maiden voyage beyond Africa’s borders. To date, there have not been very many Neanderthal bones found. Only 400 bones have been discovered and examined. As a result, many anthropologists believe that the peak population of Neanderthal was around 70,000 souls. Some anthropologists believe that the figure was much smaller than that, placing the height of the Neanderthal count at just a few thousand.

Neanderthals were short and stocky in comparison to Homo Sapiens. Their musculature indicates great strength. However, their wide physicality would have made it difficult for them to move about as quickly as Anatomically Modern Humans. They had short, sloped foreheads; prominent cheekbones, large teeth, broad noses, large and rounded eye sockets, wide noses and small chins. 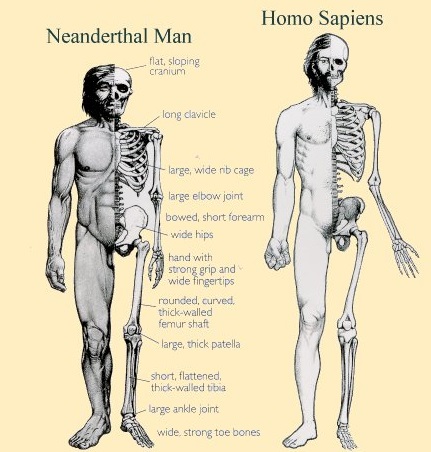 Only 1% of Neanderthals had fair skin. An even smaller percentage had fair skin and freckles. It was thought that Neanderthals matured and aged faster than modern humans. Recent analysis has lead researchers to believe that this is not true. Neanderthals are believed to have aged at the same rate as modern humans. They had a life span of 30 years. This may sound like a short life span, but we have to keep in mind that there was little of any medical treatment available to them and they led lives that were very physically difficult. 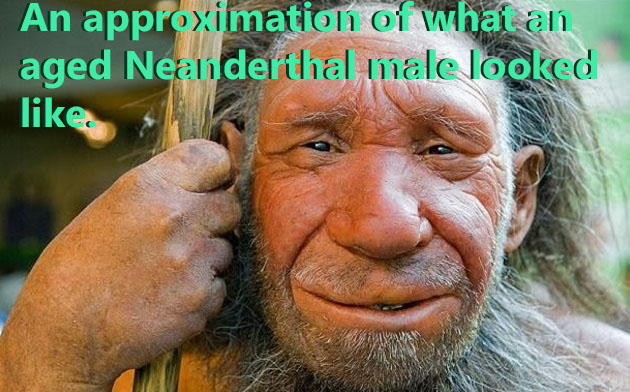 Neanderthals earned their reputation as cave people because they often made their homes in caves. Neanderthals reached the peak of their dominance during the last Ice Age. The caves were a refuge from the constant rigors of life in extremely cold climates.

Neanderthals displayed many intellectual and empathetic traits common to modern humans that can be derived from the remains and artifacts that they left behind. Neanderthals:

It is not known whether or not Neanderthals had the capacity for language.  The size of their brain indicates that it was certainly a possibility.  Their brains were organized differently than the brains of modern humans.  This different arrangement would result in different behaviors and levels of intellect in certain areas.  As a result, their capacity and effectiveness in communicating with each other is not known with any great specificity.

Are we descended from Neanderthals?

99.7% of our DNA is the same as Neanderthals. This may sound like a large amount, but remember that the difference between the DNA of humans and cows is only 1 line of genetic coding; and 99.8% of chimpanzee DNA is identical to ours. Though most human beings that are not living in Sub-Saharan Africa have Neanderthal genes in their genetic makeup; it would be quite a stretch to say that they are descended from Neanderthal. There is evidence that there was interbreeding between Neanderthals and Homo Sapiens; 2.5% of the DNA makeup of non-African humans is comprised of Neanderthal DNA. Modern Africans have no Neanderthal DNA. 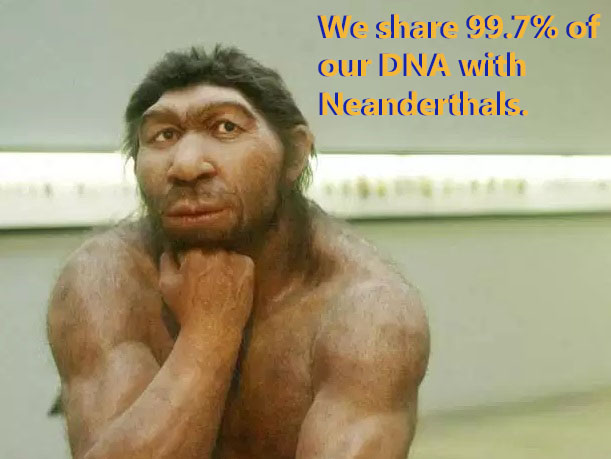 It is important to remember that even though there was interbreeding between Homo Sapiens and Neanderthals, we are descended from an entirely different line of human beings. The common ancestor that we share with Neanderthals and all other human species lived in Africa over 3 million years ago. Our lineage became distinct from Neanderthal approximately 600,000 years ago. 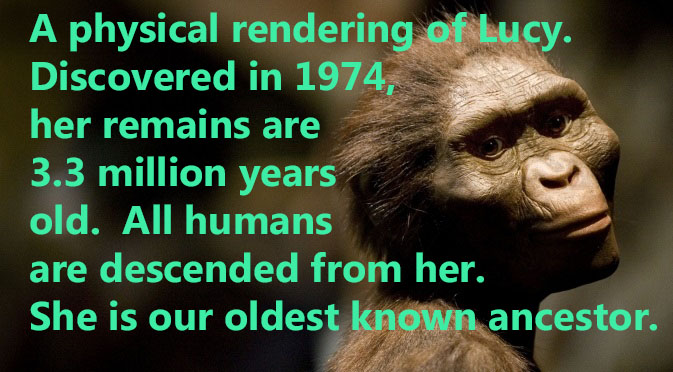 (A wax sculpture of our earliest known ancestor – Lucy. Lucy was discovered in Ethiopia in 1974.)

Neanderthals disappeared after the last Ice Age. Researchers in Canada and Scotland have uncovered evidence that seems to show that Neanderthals were unable to equip themselves with the clothing necessary to endure the freezing temperatures of the glacial Ice Age. It is generally believed that Neanderthal was not as intelligent as their Early Modern Human counterparts. As a result, they lacked the technology and cultural cohesion necessary to safeguard their collective well-being from the rigors of nature. There is some speculation as to whether or not Neanderthals wore clothing at all. 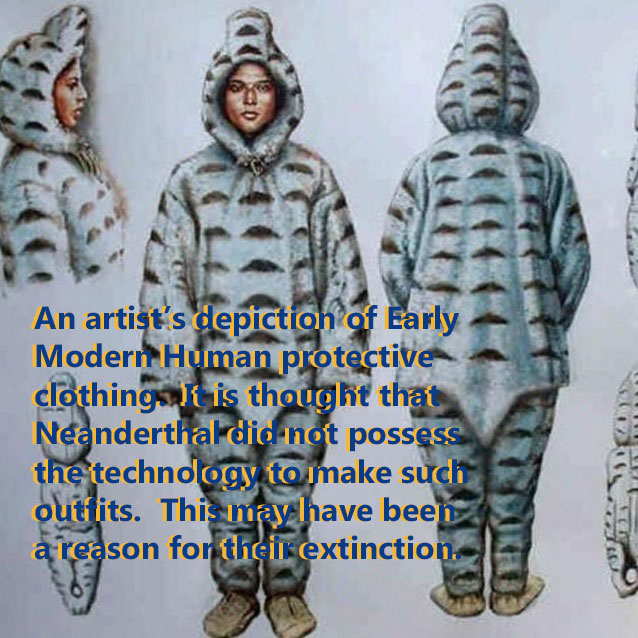 The latest research shows that Early Modern Humans were able to construct form fitting clothing from animal furs. This would have conferred to them several advantages (that we can think of).

This is all speculative, of course. Neanderthals were more physically robust than Early Modern Humans. However, their hips were very wide in comparison. This would have greatly limited their ability to travel across long distances. It would have taken an immense effort for them to do so; whereas Early Modern Humans capitalized on their slim hips to travel across lands with relative ease.

In the end, we may never know why Neanderthal disappeared from the face of the Earth. Compared to Early Modern Humans; Neanderthal was far better physically equipped to take on the challenges of nature in many respects. However, the same can be said of many species on Earth. Homo sapiens are indoor creatures. We are not made to withstand exposure to the elements. In many ways, we are frail creatures. Our intelligence has been key to our survival. Neanderthal roamed the Earth for far longer than Homo Sapiens have. They had a successful run on this planet. The mystery of why they vanished from the face of the Earth remains one of nature’s most closely guarded secrets.