Ted Bundy: His teeth and his conviction. Part 2 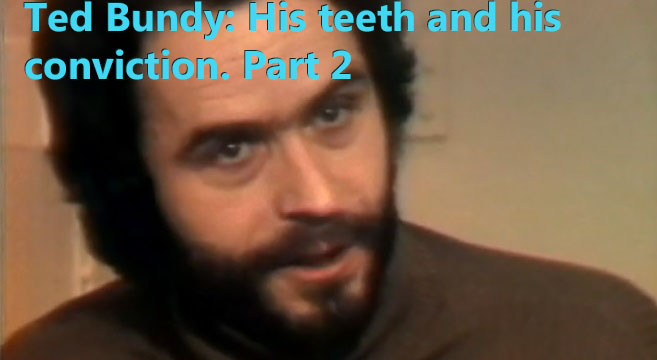 Bundy graduated from Woodrow Wilson High School in 1965. His high school classmates described him as generally well liked and fairly popular during his time at the school. Ted Bundy himself stated that during his time in high school he realized that he did not understand the motivations that drove people to want to be close to other human beings. In his high school years, he apparently began to perfect the deceptive behaviors that would ingratiate him toward his unsuspecting future victims.

He went on to attend several schools: 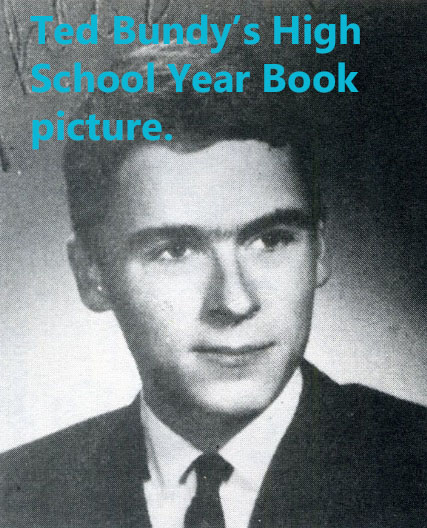 Early in 1968 he left school and went to work. He worked as a volunteer on Republican Candidate Nelson Rockefeller’s campaign for President of the United States. In the summer he was also a Rockefeller delegate at the 1968 Republican National Convention.

He was involved with a young lady that he would name Stephanie Brooks in his memoirs (this was not her real name, her true identity was discovered years after his capture and she has always opted to preserve her privacy and not speak about Ted Bundy when approached). He was smitten with Stephanie and wanted a long term relationship with her. Like most romantic relationships, things went well in the beginning. After some time, Stephanie began to feel that Bundy was extremely immature and had no ambition in life.

She left him in the late summer or early fall of 1968. Ted Bundy describes himself as being completely crestfallen when she broke up with him. After his relationship with Brooks came to an end, Bundy traveled to visit relatives in various parts of the country. He enrolled in Temple University in Philadelphia, Pennsylvania for one semester. Then moved back to Washington sometime in the fall of 1969.

Soon after returning to Washington, Bundy met a divorcee named Elizabeth Kloepfer. Their relationship has been described as tumultuous. They shared an intense bond, despite the volatile nature of their relations. They shared a unique chemistry that was so magnetic that Kloepfer continued to date Bundy well after he was first imprisoned in 1976. 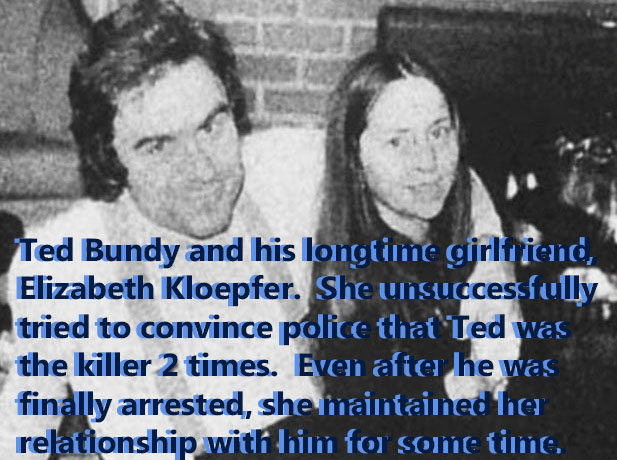 When Ted Bundy moved back to Washington he was a changed man. He had somehow gained the focus and ambition that Stephanie Brooks complained that he lacked just 2 years earlier. He again enrolled at the University of Washington in 1970 and declared psychology as his major. He was a good student, achieving high honor roll and the adulation of his professors.

Interestingly, Bundy took a job that would typically require empathy and tenderness in 1971. He worked at Seattle’s Suicide Hotline Crisis Center. This is where he met the famous crime writer, Ann Rule. Rule was a former police officer who was hoping to begin a career as a crime writer. According to Rule, she and Bundy worked very closely together. She thought of Bundy as kind and compassionate. She saw nothing negative about Bundy’s persona at the time. She found him personable and even admitted to having a romantic interest in him. Bundy is described as being an outstanding worker at the crisis center. He was great at handling phone calls from severely distressed callers. 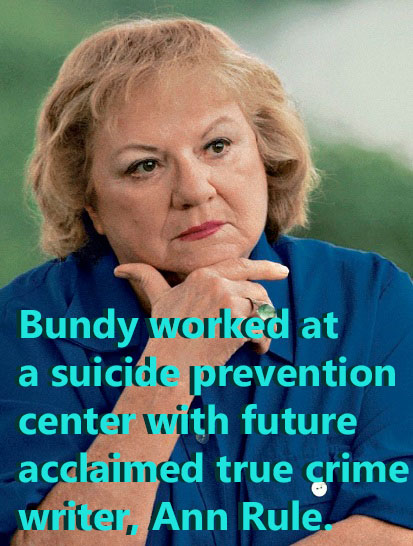 In 1972, Theodore Robert Bundy graduated from the University of Washington. Shortly thereafter, he joined the reelection campaign of Washington state Governor Daniel J. Evans. He performed covert work for the campaign and his efforts resulted in him being hired by Chairman Ross Davis of the Washington State Republican Party. Once again, Bundy was described in a positive light by a person that worked closely with him. Chairman Davis thought of Bundy as smart, aggressive and having a true passion for Republican ideals.

Bundy decided that he wanted to attend law school. He took the Law School Admission Test. His scores were mediocre, but with recommendations from several prominent professors and high ranking members of the Washington Republican Party political establishment he was accepted into law school. Bundy attended UPS Law School in 1973.

In the summer of 1973, Bundy began to date Stephanie Brooks again. She was blown away by Bundy’s transformation. In a few short years, Bundy went from an immature and unfocused young man into a seemingly debonair and career-oriented individual. Brooks thought that Bundy was on the path to rising very highly into the ranks of the political establishment. 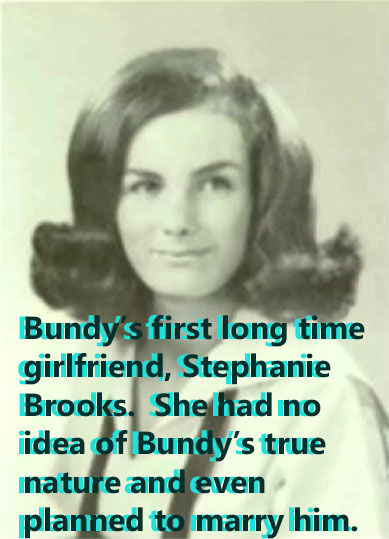 Unbeknownst to Brooks, Bundy was still courting Elizabeth Kloepfer (Kloepfer was unaware of the existence of Stephanie Brooks, too) during the entirety of their newly rekindled relationship.

Brooks traveled to see Bundy and stayed with him on several occasions. Their relationship appeared to be very serious and Brooks thought that they were moving quickly toward cementing their devotion to each other. They discussed plans for marriage. Very suddenly, Ted Bundy ceased all communication with her. She was unable to reach him by telephone or mail courier for an entire month. Prior to this, they were in constant contact with each other.

When she was finally able to contact Bundy and ask him why he had ended their courtship, he responded in a very calm way by saying that he had no idea what she meant. In later interviews Bundy explained that the entire relationship was a ruse on his part. He brought her into his web of deceit for the purpose of revenge. He said that he only wanted to know if she would have married him. Once he obtained confirmation that his charms had elicited such a strong desire in her, his task was accomplished. He lost all interest in her and closed the door on their relationship forever.

Bundy was frequently absent from his Law School classes by now. By the spring of 1974, he had completely stopped attending classes. This correlated with the time frame in which young women in the Pacific Northwest began to go missing. The true Ted Bundy was being unleashed on the world in full force.