Archaeology is the study of anatomically modern human beings through the acquisition and analysis of physical artifacts and remains. One of the most useful tools that our ancient ancestors have provided to archaeologists is their teeth.

Archaeologists are very fond of teeth. This is because teeth are often the only well preserved body part on many of the specimens that they deal with. Teeth convey an impressive range of information about the individual that they belonged to as well as the environmental challenges that the individual had to live with and overcome.

When dealing with human remains that can be thousands of years old one of the primary sources of indicators about how the subject lived his or her life is the condition of their teeth.

WHY ARE ANCIENT TEETH SO WELL PRESERVED?

Teeth are protected by enamel. The enamel on our teeth is remarkably hard. In fact, tooth enamel is the hardest part of the human body. As such, when a human being perishes their teeth are very resilient to decay and retain lots of information. This information can be observed from the condition of the teeth. Well preserved teeth indicate an affluent and easygoing lifestyle. Teeth with a high degree of decay indicate a hard life.

It is very common for the fossilized remains of our ancestors to show indicators of bad health through the condition of their teeth. It is exceptional to find humans who maintained optimal dental health throughout the course of their lifetime. Such a find indicates that the person was on the high end of the socioeconomic stratum.

During our formative years (from birth through adulthood) our teeth are hardened for the rugged tasks of converting our food into soluble form. This is a job that they will have from the time that baby teething begins until the end of life (or the end of the ability of the teeth to function properly).

WHAT DO TEETH TELL ARCHAEOLOGISTS ABOUT OUR ANCIENT ANCESTORS?

Teeth are an excellent indicator of the overall health of the subject being examined. They can tell if the person had access to good nutrition or if they were plagued with hunger or bad dietary options throughout their lifetime. If the subject was unhealthy their teeth will reflect that very obviously.

Teeth can also clue an archaeologist in on the type of culture that people lived in.

For example, in many parts of modern day Africa that lie south of the Sahara Desert it has been well documented that women with gaps in their teeth are considered to be very attractive. Many women from this area of the world undergo surgery to create

a gap in their teeth to achieve this aesthetic. Archaeologists in the distant future may find remains from modern day Nigeria and derive that a gap in the 2 front teeth was indeed a symbol of beauty in parts of Nigerian culture. This is because the incidence of gaps in the 2 front teeth in the women of Nigeria would be noted to be much higher than would normally be expected.

Another example of this would be the higher incidence of healthy and perfectly straight teeth in more affluent regions of the world. Generations from now, archaeologists will be able to discern that the remains of people that come from the more affluent countries of present day had the resources to invest in making their teeth look as perfectly aligned as possible. 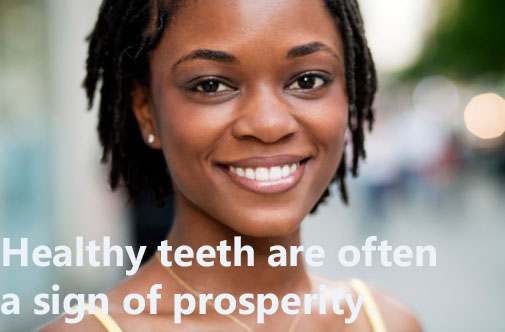 HOW IS PHYSICAL EVIDENCE THAT IS THOUSANDS OF YEARS OLD EXTRACTED FROM TEETH?

The types of food that were consumed can be uncovered by examining teeth. Using Carbon-14 dating along with a thorough examination of the plaque on teeth an archaeologist can gain a fairly accurate picture of the diet of the subject. Lasers are used on the teeth to release the carbon from the surface. The carbon removal process releases quantities of the plant, animal and other environmental residue that make up the plaque on the subject’s teeth.

Evidence has also been found of ancient dentistry practices from evaluating our ancient ancestors.

Egyptians were performing surgical dental procedures such as pulling teeth and drilling out cavities as far back in time as 5,000 years ago. Egyptians wrote extensive manuals on oral emergency care. As the ever-industrious Egyptians accumulated knowledge they even wrote prescriptions for pain killers dating back to 3,500 years ago.

The Etruscans of Ancient Italy added a flair for design to their dentistry practices. They have been found to be the first civilization to apply gold to teeth in an attempt to preserve them. The Etruscans were also the first known civilization to use prosthetic replacements for teeth. These prosthetics were other human or animal teeth and their position was solidified with bands made of gold. Their innovative approaches to using prosthetics in their dentistry practices date back to 1,700 years ago.

Interestingly, the Ancient Greeks are not held in high regard when it comes to their ancient dentistry practices. Evidence shows that the Ancient Egyptian and Etruscan civilizations were far more advanced in their approach to treating dental issues.

The ability to endure pain was considered a high character trait in Ancient Greece. As such, toothaches and other dental maladies were more likely to be endured than to be alleviated.

WHAT IS THE MAIN IMPROVEMENT THAT MODERN DENTISTRY HAS DELIVERED TO DENTAL PATIENTS?

It should be noted that until very recently, going to the dentist was always a painful experience. Most of the amenities that we enjoy today simply did not exist. Even as recently as the past 100 years a trip to the dentist was almost guaranteed to be an arduous process.

The story of human innovation, culture and evolution can be told with great specificity through the archaeological study of teeth. Archaeologists will continue to use teeth to gain further insights into our ancient ancestors for some time to come.