The Birth of the NBA 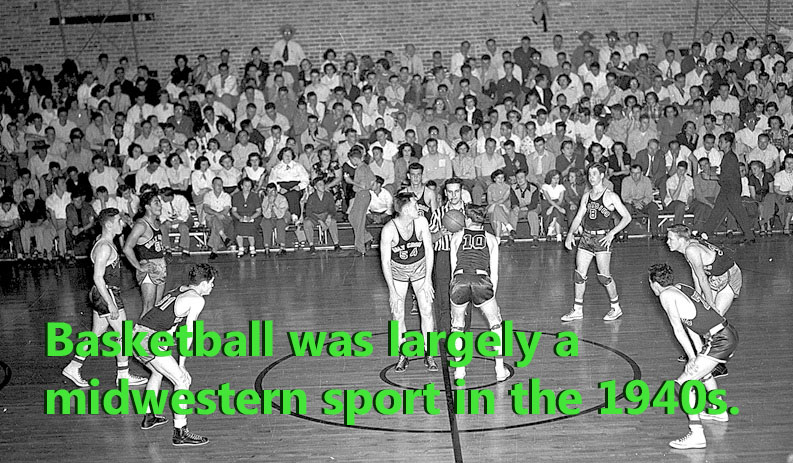 It was a surprise for me to learn that the sport’s most ardent practitioners hailed from the mid-western sections of the United States. There was a large fan base in the interior of the country. Basketball had relatively few followers in the big cities of the United States. Being that I grew up in New York City and I can personally attest to the fact that playing basketball was a rite of passage for growing boys in the city; I am simply amazed at how our culture changed to make basketball one of the premiere professional sports in the country.

Today, basketball is played all over the world.

The American Basketball league, established in 1925, was the first officially recognized basketball league in America. The ABL did not merge with the NBL and the BAA to form the NBA. The ABL had a 30 year run before it ultimately disbanded in 1955. The ABL was a substantial league. The number of teams in the league is not definitively known. Estimates place the number of teams at between 40 and 50.

The National Basketball League was started in 1937. It was originally called the Midwest Basketball Conference; however, the leaders of the organization wanted to broaden the appeal of their league and decided to change the word “Midwest” to “National” in an effort to enhance the profile of the organization. The Goodyear, Firestone and General Electric companies were the creators of the league.

The rules of the league were ill-defined. The only hard rules as far as scheduling was concerned were:

The games were broken up into 3 15 minute periods or 4 10 minute quarters.

The NBL was the only official league in the United states for the first 9 years of its’ existence. It served a mainly mid-western market. In 1946, another basketball entity had formed in an attempt to capitalize and expand on the popularity of this nascent professional sport.

The Basketball Association of America was founded in 1946 and immediately began to compete with the NBL for fans and players. The BAA saw a great opportunity for basketball in larger markets. They targeted large cities with sprawling urban populations.

As the battle for star players and large fan populations waged on, the NBL began to suffer. The BAA was able to attract many of the best players of the era. Additionally, several NBL teams left to join the BAA.

Faced with the ominous signs that they were losing their foothold in professional basketball, the NBL joined with the BAA to become the NBA in 1949.

George Mikan (June 18 th, 1924 – June 1st, 2005) was the first basketball player to transcend the sport. He was 6’10” and incredibly dominant. He was so good that his singular presence on a basketball team would almost always ensure that team’s victory. Basketball aficionados quickly made the connection between his dominance and his height. As a result, subsequent generations of basketball players were, on average, much taller than the early professionals that played the sport. 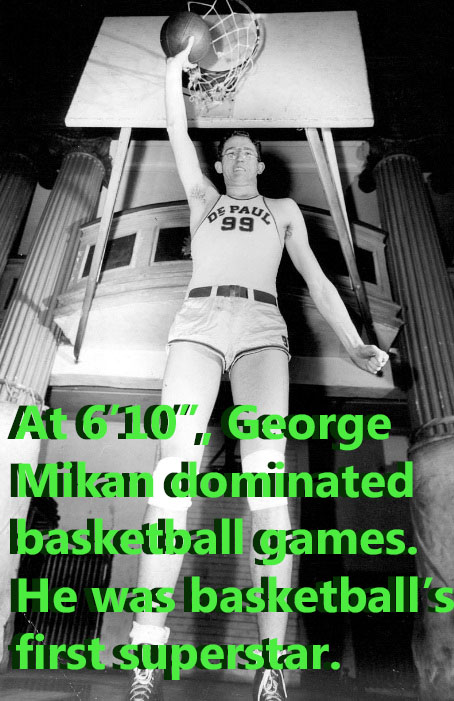 He also devised a drill that is a centerpiece of training for tall basketball players to this day. The Mikan drill helps players to master timing and rhythm for rebounding and scoring from the free throw line.

George Mikan’s name is not known to the general public, but his influence is well known by professional players the world over. He was so revered by Shaquille O’Neal that when Mr. Mikan passed away in 2000 at the age of 80, O’Neal offered to pay for his funeral expenses.

The NBA struggled to broaden the appeal of the sport in the years immediately following its’ inception. Many found the game to be boring. The NBA began in 1949 with 17 teams that comprised the large city teams of the BAA and the small city teams of the NBL. Due to lack of public interest in the sport, by 1955 the number of teams had dwindled down to 8.

Fortunately, the league came up with a solution to this problem. The game was revolutionized by the change to a 24 second clock. This sped the pace of the game up considerably. The change was well received. Audiences enjoyed the clock change and tuned in to watch the games in ever-increasing numbers.

Basketball in the United States is dominated by black and white players (there are several players of other races that play at the professional level, but the NBA remains a mainly black and white league). However, it was exclusively a white sport until Earl Lloyd came along. Earl Francis Lloyd (April 3, 1928 – February 26, 2015) was the first black player in the NBA. There were 3 other black players that played in his first season. Lloyd bears the distinction of being the first. His addition to the ranks of professional basketball players marked the beginning of the long road toward the NBA becoming a fully integrated league. 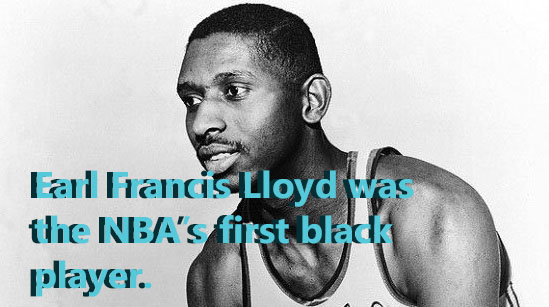 Bill Russell (February 12, 1934 – present) was one of the first black players in the league. He was also the first black player to transcend the game and become a superstar. He played for the Boston Celtics from 1956 to 1969. He was central to the success of the team. To this day, he is regarded as one of the best players in the history of the sport. He brought his own innovations to the sport by way of his defensive play. 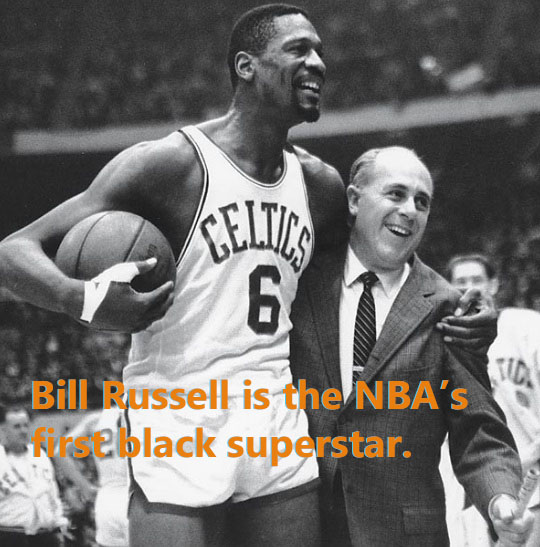 He was voted the NBA’s most valuable player 5 times. He led the league in rebounds 4 times and had 1,000 or more rebounds in 12 of the 13 years that he played. Amazingly, he led the Celtics to 11 championships during his 13-year career. This is an accomplished that no team has come remotely close to rivaling in the decades since his retirement. Russell’s incredible success paved the way for a floodgate of black players to follow. Kareem Abdul Jabbar, Julius Irving and Wilt Chamberlain would be the superstars of the 1970s. Basketball would eventually go on to be dominated by black players in the ensuing years.

The White Shadow was a television series that ran for 3 seasons, from 1978 to 1981. It was about a white basketball coach that mentored a team comprised of mostly Black American players.

While the show was not a ratings hit during its’ run, it has been widely praised by critics both past and present. It tackled difficult subject matter (especially compared to the subject matter shown on television at the time) and mature themes. Additionally, there was an unintended consequence brought about by the show during its’ syndication.

The show went into syndication around the world and brought basketball to an international audience. Turkey’s young population made basketball a centerpiece of their sports culture as a result. Millions of young people started playing basketball in Turkey after watching the show. 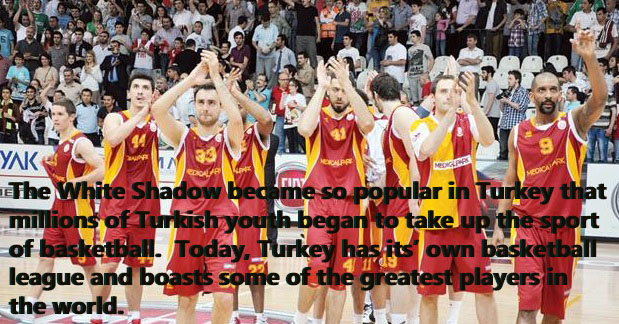 From Turkey, basketball spread all around the world. There are currently 110 countries that have large segments of their populations that play basketball regularly. Many of these countries have historically had antagonistic relationships with the United States. However, basketball has broken through those bad relations and found a home in these nations.

Basketball was invented in 1891 in Canada. In the early years of basketball’s existence, it was played with a soccer ball. In 125 years it has bone through numerous transformations. It has now become an internationally recognized sport that features prominently at the Olympic Games.

The NBA was formed from the combination of 2 organizations and has since become a behemoth in world culture. NBA games are watched all over the world. It is not a stretch to say that the NBA has helped to bring the black and white races of the United States together.

During the 1990s; basketball’s most prominent superstar, Michael Jordan, was ranked the most recognizable person on the face of the Earth. Such is the power of the sport and its’ most prominent organization, the NBA. 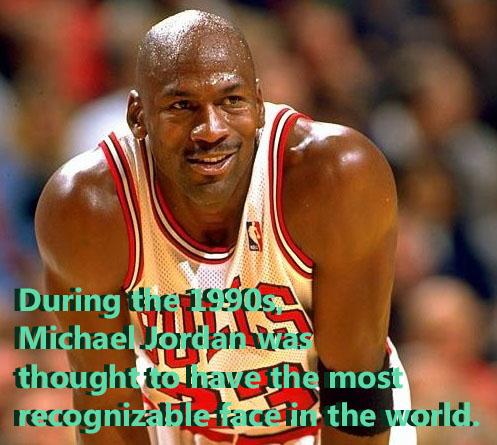