​The boxing match that loosened my teeth

I have always been fortunate enough to have strong teeth. I haven’t had any serious dental problems to date. Unfortunately, there was a point in my life where I took my dental health for granted. At the age of 34, I decided to engage in an activity that is usually the province of those that are much younger than I was at the time.

Back in 2010, I was living in Rogers Park; a neighborhood in the northernmost part of Chicago, Illinois. I had started working out the year before, in 2009. My routine consisted of running and lifting weights. After 10 months of this, I thought that I was in pretty good shape. I wanted to add a practical activity to my exercise regimen. One night, my wife came to me with a pamphlet that included some of the community activities available to adults living in the Rogers Park area of town.

There were dance lessons, chess teams, yoga classes, spinning classes, bowling leagues and running groups. It was actually a pretty impressive spread, it was not at all what I was expecting. Still, none of these classes moved me to want to sign up. I perused the brochure for another minute or so and found something that immediately excited me – boxing.

When I was growing up, I took Taekwondo for 5 years. I suppose in the years that ensued I fashioned myself something of a fighter (despite the fact that I never took up any of the fighting disciplines beyond my childhood years). Taekwondo was great in that it taught me discipline. It taught me how to use my body weight to build momentum for my punches and kicks. We learned the basics of grappling and wrestling as well as how to fall down in ways that could prevent serious injuries. Even with all of this self-defense knowhow; there were inherent weaknesses to some of the techniques that we were taught.

Taekwondo is more of an art than an effective fighting methodology in real-life circumstances. Each move is typically executed within the framework of combination forms. Don’t get me wrong; those that have mastered the art are a force to be reckoned with in a hand-to-hand combat scenario. However, one has to study for years to be good enough to apply the art form to real life self-defense situations.

This is not the case with boxing. With a few months of diligent training, most people would be sufficiently proficient with their hands to defeat most untrained opponents. I like the idea of being able to defend myself. I knew that if I applied myself and learned the techniques from the boxing class; I would be equipped with practical fighting tools in the unfortunate event that I found myself in a physical confrontation with an opponent.

The course prerequisites only required participants to purchase hand straps and a mouthpiece. The boxing gloves and headgear would be provided for us at the boxing gym.

To my surprise, the teacher was a senior citizen. He was an Italian man in his early 60s. I don’t know why I was expecting someone that was younger. There were a few pictures of him as a professional boxer in his early 20s. They were selectively placed in various locations throughout the gym. He had an impressive record. 26 wins and 4 losses. As it turned out, he continued to box competitively throughout the years. He was currently getting himself back into shape so that he could fight in a senior citizen circuit!

During the first class, he provided several drills for us to perform. It was pretty basic fare. He taught us how to stand and jab; proper defensive posture and counter-punching; he also set us up in front of mirrors so that we could watch what we were doing.

While performing my drills, I couldn’t help but notice the more seasoned and experienced boxers practicing on the other side of the gym. They would practice their hand motions and footwork in full view of the novices in the class. After their solo work, they would go into the ring and spar with each other. I thought that the class would be far more interesting if the class was allowed to spar with the experienced fighters.

There were male and female fighters. They displayed an impressive array of combination attacks and mesmerizing foot movements that allowed them to work the ring competently. I watched them diligently in between my drills. At the end of the first class, the coach told us that we would be allowed to go into the ring in the next class. I was excited by this prospect.

When I returned for class a couple of days later, I eagerly anticipated the sparring portion of the class. The coach insisted that sparring was a volunteer-only activity. Anybody that did not want to spar would not be frowned on. It was a personal choice that the coach respected. I was amazed that almost everyone in the class declined the opportunity to spar. What was the point of that?

Out of all of the people in the class, only myself and one other classmate would spar in the ring. The coach would not allow us to fight against the experienced athletes. We were only allowed to fight each other. We sparred for 4 rounds at the end of the class. It was totally exhausting. I thought that my daily 3-mile runs had prepared me for the cardiovascular rigors of boxing. I was totally wrong. By the beginning of the 4th round, my legs felt like jelly. My cardiovascular system was so burdened by the constant explosive bursts of energy needed to attack my opponent that my entire body began to feel fatigued and weak when the 3 rd round came to a close.

When the fight ended, the coach said that we would be allowed to spar with the experienced athletes during the next class. I smiled ear-to-ear when I heard that.

At the beginning of the 3rd class, I let the coach know that I had a desire to fight with the veteran boxers. He told me that I would need to warm up for about 20 minutes and then he would facilitate the sparring session.

Once I warmed up and 20 minutes transpired, I entered the ring to spar against a young man in his early 20s. He had 2 years of fighting experience. I had already observed him in the ring. He was fairly skinny and appeared to weigh, at most, 145 pounds. He was very quick, but I surmised that I would be able to negate his speed with my power. I did not imagine that his blows would have very much power behind them.

The first round began. 1 minute into the round, I quickly realized that this kid was masterfully working the ring. He used his foot movement techniques to circle the ring, briefly engage me with a flurry of blows and escape being hit when I counter-punched. By the end of the 1 st round, I figured out that I would need a strategy to emerge victorious at the end of this bout.

As the 2nd round began, I continued to endure a flurry of blows to my head and body. I kept my cool and continued to think. After getting hit with approximately 8 punches in a row, I recognized a split second opportunity to launch an attack against my opponent. I unleashed a powerful blow that hit him square in the face and caused his head to snap back. The punch sounded off on impact. Due to the acoustics of the gym, the loudness of the blow exaggerated its' true impact.

Everybody in the gym immediately took notice of the sound of the punch connecting with my sparring partner. There were some audible gasps from my classmates. My sparring partner seemed generally surprised that I could catch him with one of my punches. He laughed while simultaneously shaking off the punch.

Payback was harsh. Over the course of the next 2 rounds, he basically dismantled me. I was a human punching bag for the remainder of the fight. By the time the fight was over, I had a black eye and several bruises on my face. I took a serious beating for having the audacity to punch a more experienced fighter in that fashion.

Discovery of the loose tooth

When I returned home to my wife, she had a look of horror on her face. I knew that my facial appearance was distorted by a black eye, cuts and swelling. I went into the bathroom to wash up. While brushing my teeth, my left lower canine tooth felt as if it was dislodged. Upon further inspection, my left lower canine and the Lateral Incisor directly beside it were actually loose!

I went into full panic mode. I looked online for any remedies to loose teeth that were the result of blunt force trauma. I went to bed hoping that my teeth would rectify their positions with the passage of time. Fortunately for me, my teeth began to solidify with the passage of a few days. 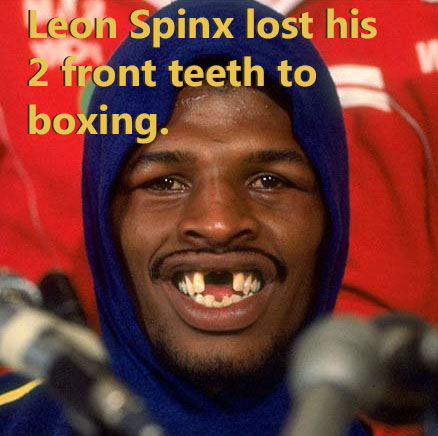 I learned that I was absolutely no match for the trained fighters at the gym. I was reminded of Leon Spinks, the former professional heavyweight fighter who rose to prominence in the late 1970s. Due to his fighting career, he was missing both of his front teeth by the time that he reached the zenith of his fame.  I asked myself if I was willing to risk losing a tooth for something that would be no more than a hobby. The answer was no. Definitely not. I hung up my boxing aspirations that day. I returned to the gym to workout. Occasionally, I would spar with another member of my class, but I never stepped into the ring with any of the veteran fighters again. I’d rather have all of my teeth then to risk losing one in pursuit of an activity that I only have a passing interest in.