​The day that I chipped my tooth

I was in the 1st grade. It was November and the temperature had just begun to drop in anticipation of winter.  The morning started out like any other. I remember this day so vividly because it was the day that my little brother was born. I gained a brother that day, but lost a piece of one of my front teeth.

I woke up pretty early that morning. My mother was having a particularly hard time getting around and my father wanted to get her to the hospital in case this was the day that she was going to give birth. The baby that she carried in her womb was 10 days overdue. It only made sense to be proactive about the situation. I washed, got dressed and ate my breakfast in the car. It was still dark outside. I was a bit drowsy. My mother woke me up several times on the way to the hospital to warn me that I was spilling crumbs on my school clothes.

When we arrived at the hospital, my mother was immediately seated in a wheelchair. We were taken to a room and a doctor asked my mother a series of questions. My mother looked over at me and gave me a cheerful smile. I could see a bit of worry in her eyes, though. After some time, my Aunt Kizzy arrived. After she exchanged pleasantries with my parents she took me outside of the room and sat with me.  A few minutes passed and my mother emerged from the room; she was being wheeled from the room in her bed. She waved at me again and smiled at me. She went out of view as the nurse pushed her down the corridor.

I remember feeling something that was akin to a combination of anxiety and euphoria. I was happy but simultaneously afraid for my mother. I couldn’t shake the feeling that I saw concern in her eyes when she was putting on a brave front with her warm facial expressions toward me. My father hugged my aunt and told me to listen to everything that she told me to do. Aunt Kizzy would be taking me to school that day. As we left the hospital, Aunt Kizzy said, “By the time that you get out of school, you’ll have a baby brother or a sister.” I told her that I wanted a sister. I liked the idea of protecting a little sister in those days (in the space of 2 years I would end up having a little sister that, to my recollection, never needed or wanted my protection from anything).

Aunt Kizzy was about to drop me off at the front of the school. However, early kids did not come in through the front entrance.  We assembled in the school playground in the back of the school. She gave me a big hug and a kiss and told me that she would be back for me at dismissal or when the baby was born, whichever came first.

In the playground we played tag and had impromptu karate battles (karate movies were very big with kids in my neighborhood during this time). We then moved on to our favorite subject – comic book super heroes. I was just getting into comics back then. I had only recently learned the difference between the 2 dominant publishers of the genre, Marvel and Detective Comics. Around this time, the Secret Wars series was on store shelves everywhere. We were all fascinated by the tales that were being weaved in the pages of the mini-series.

I told everybody that I was going to become a big brother that day. The news was greeted with measured excitement. Many of my classmates had older and younger siblings. Truthfully, I was behind the curve. A few of my friends told me that I was pretty old to be having my first sibling. That line of thought is pretty funny to me now being that I was quite young then.

My parents had already called ahead to let the school know that there was a possibility that I would be leaving early that day due to the newest anticipated addition to our family. After we were all seated in class; my teacher called me up to her desk and spoke briefly with me to let me know that she was aware of the situation.

I went through 3 periods of classes with no interruptions. I was eagerly anticipating the sound of my name being called over the loud speaker. I thought every single moment would be the instant that my name would be called. Much to my chagrin, there was no word. My mind began to drift toward the possible negative implications of what that may have meant. I went to lunch with my mother on my mind.

Is my mother going to be alright?

Is the baby alright?

Was I really going to be a big brother?

All of those questions rotated through my mind.

After lunch we all went outside for recess. I must have been really involved in whatever game we were playing because a few girls were yelling at me from a few feet away. They said that my name had been called over the loudspeaker several times. I had not noticed.  Everybody knew that I was expecting a baby sibling that day. They encouraged me to hurry up and get to the Principal’s office.

The tooth is chipped

I ran back toward the office at full speed. While I was running; a friend of mine, Trevor, was calling my name. I turned back to look at him while I was running. I suppose in that instant I realized that it would be a good idea for me to look where I was going. I was running with my mouth wide open. I turned my head just in time to run into a brick wall! 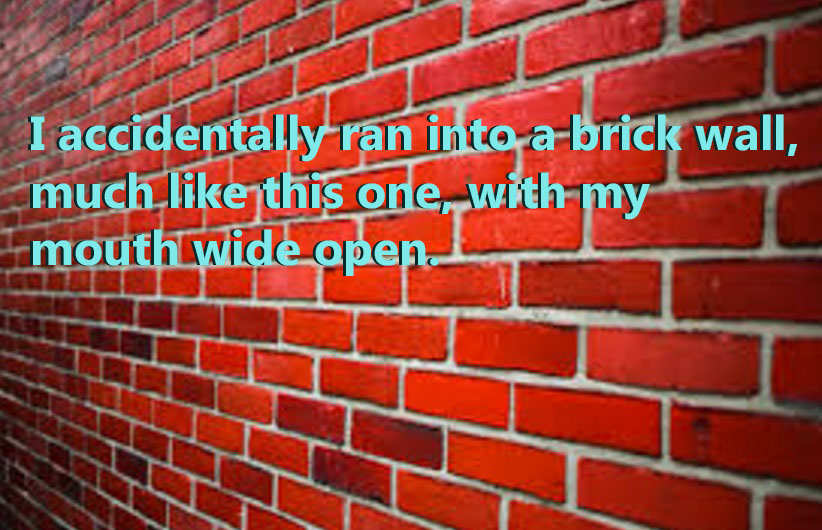 I fell to the ground in extreme pain. I was rolling around and trying to somehow mentally deflect the waves of pain that were coming from my tooth and traveling through my gums. It was a sensation that I had never encountered before (or since). I rose to my feet. The pain slowly began to subside. I continued my journey to the Principal’s office with much more caution.

Aunt Kizzy was in the office waiting for me when I arrived. She started to speak when she noticed the grimace on my face. She asked me what happened. I responded, “I ran into a wall outside.”. She looked very concerned but I assured her that I was okay. The Principal was smiling at me and wished us good luck. We left the school and began the car ride to the hospital. The soreness in my gums was starting to go away now and I was looking forward to getting to the hospital to see my mother.

When we arrived at the hospital my aunt had me wait outside of the room where my mother was saying. She emerged from the room and told me that my mother was okay and my father was in the room with her. She told me that she had some news to share with me. She said, “You have a little brother. But since you said that you wanted a little sister, we are going to have the hospital keep him, since I know that you don’t want a brother.” I immediately responded, “No! No! I want him! Don’t give my little brother away!”. She laughed heartily. Of course, she was joking. At the time, I took her very seriously.

The moment that the chipped tooth was discovered

Aunt Kizzie escorted me into the room. My father was standing over my mother and my little brother. My father waived me forward and my mother was smiling at me. I smiled back. Mom replied, “What happened to your tooth?!” By now I had forgotten about running into a brick wall back at school. I had no idea what she was talking about. I replied, “What?”. She said, “It’s chipped! Go look in the mirror.”

Sure enough; when I looked in the mirror I could see that my left front tooth was chipped. Not only that, it was pressed further inward. I was totally shocked. It was a very obvious chip and I didn’t recognize my own smile.

I got over it quickly, though. I emerged from the bathroom with a shoulder shrug and promptly got to the business of meeting my baby brother for the first time. I wished that I had a structurally complete set of teeth to smile at him with, but being that he had no teeth, he was not in a position to judge.