The Life and Times of Muhammad Ali: Part 1

(Note: In this synopsis of Ali's incredible life, he will be referred to as Cassius Clay until the time of his name change to Muhammad Ali.  This is for purposes of being consistent with depicting who he was at various stages of his life.  No disrespect to this great legend is intended.)

This morning I woke up to find out that one of the most beloved persons to ever walk the Earth, Muhammad Ali, passed away last night. Ali is easily one of the most charismatic and magnetic personalities to ever enter into the public spotlight. His achievements in the boxing ring are staggering. It is as if he was endowed with a type of strength, courage and enduring will power that only a select few individuals are gifted with.

He dismantled some of the most ferocious fighters in the history of boxing. Many of his opponents were much bigger than he was. No matter their record, reputation or size, Ali was always eager to prove his mettle against these fearsome giants. His talent in the ring was only eclipsed by his incredible personality.

Ali was outspoken and was possessed of an excellent wit. The passage of time may have taken his physical abilities and dulled his delightfully sharp tongue, but Father Time was never able to diminish Ali’s tremendous character.

Muhammad Ali was born Cassius Marcellus Clay, Jr. in Louisville, Kentucky on January 17, 1942. He was raised in a modest home by his parents, John Clay and Sallie Anne Clay. Ali had working class roots. His father was a billboard painter and his mother was a domestic worker employed to work in private homes. Muhammad Ali has one younger sibling, Rahman Ali (born Rudolph Clay). 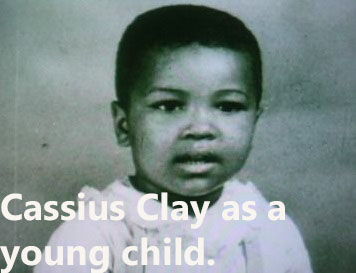 Ali’s motivation to get into boxing came when he was 12 years old. He was on a trip to the Columbia Auditorium in Louisville, Kentucky. While inside, a thief stole the bicycle that Ali rode to the facility. When Ali came outside to find that his bicycle was gone he was enraged. He reported the theft to a nearby Police Officer and told the officer that he wanted to “whoop” the person that committed the theft.

Sergeant Joe Martin, the police officer that took Ali’s complaint, was a boxing trainer. He advised young Cassius Clay to learn to box before attempting to exact his revenge on the thief (as far as anyone knows, Clay was never able to find out who stole his bike). When Clay began training, it was obvious to Sargeant Martin that he was a natural. Martin went on to train Clay for 6 years, culminating in Cassius Clay’s turn in the 1960 Olympic Boxing Competition. 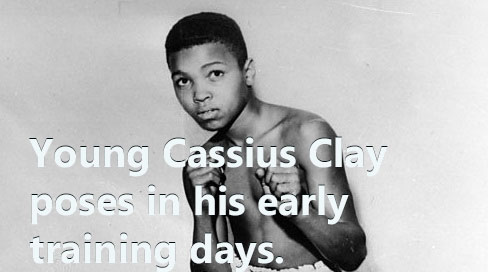 Muhammad Ali traveled to Rome with Joe Martin and the United States Olympic Boxing Team in 1960. He competed in the light heavyweight class and faced off against 4 of the world’s best young fighters. During the tournament, he easily defeated his 4 opponents. He won the Olympic Gold Medal for his weight class by defeating Zbigniew Pietrzykowski, a 3-time European boxing champion. 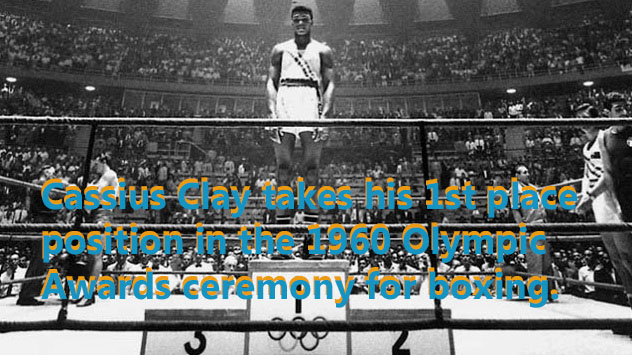 After coming back home to Louisville, Kentucky he was dismayed when he and a friend were denied service at a whites-only restaurant. Clay was outraged that despite the fact that he won an Olympic Gold Medal for successfully representing his country on the world stage, he was still treated as a second class citizen in his hometown. Ali threw his Gold Medal in the Ohio River. (Though his claim to have thrown his Gold Medal in the Ohio River has been disputed by a few of his closest confidants, Ali himself never refuted this story.)

On October 29 th, 1960, Cassius Clay made his debut as a professional fighter. Over the course of the next three years he achieved a fighting record of 19 wins and 0 losses. 15 of his 19 wins came by way of knockout. A little known fact is that Cassius Clay is the fighter that defeated the longest reigning Light Heavyweight Champion in the history of boxing (to this day), Archie Moore.

It was during this time that Cassius Clay’s prodigious wit came into public view. During interviews he would taunt his opponents with an assortment of hilarious and catchy rhymes. He had a unique and engaging vocal delivery as well. A handsome man that sported a gap between his 2 front teeth, he spoke openly of his good looks and juxtaposed them with the facial features of his opponents. Clay was an entirely new type of personality in professional athletics. Up until that time, athletes were subdued in their public presentation. They were low key in their interviews. Clay had no interest in pretending to be humble.

Though Clay’s wins made a bout with Liston inevitable, many boxing experts predicted that Clay would be destroyed by the Heavyweight Champion in short order. Liston was viewed as the brooding veteran with the gifts to back up his intimidating aura. Ali was viewed as a loudmouth. Despite Ali’s unswerving proclamations that he would emerge victorious, the overwhelming majority of the public didn’t think that he had a chance. Sonny Liston was a 7 to 1 favorite.

Clay’s frequent taunts of Liston must have gotten under his skin because Liston started their fight by rushing Ali right away. Clay used his superior speed and footwork to dodge much of Liston's onslaught.  Clay then responded by battering Liston with a flurry of blows. The outcome of the fight was in doubt when Clay suffered a mysterious burning sensation in both of his eyes (this unexplained burning of the eyes is reported to have been experienced by at least 2 of Liston's former opponents). However, in the sixth and final round, Clay recovered and defeated Liston by TKO (Technical Knockout) when Liston refused to return to the ring in the seventh round.

(The following video shows a triumphant Cassius Clay (despite the caption in the video, he had not yet changed his name to Muhammad Ali) proclaiming "I shook up the world!  I shook up the world!" after his upset victory over Sonny Liston.  It still ranks as one of the biggest upsets in the history of boxing.)

At age 22, Cassius Clay became the youngest fighter to defeat a Heavyweight Champion to become the new champion. Shortly after the Liston fight, Cassius Clay converted to Islam and changed his name to Muhammad Ali.

Ali, the newly crowned Heavyweight Champion of the World, went on to fight Liston again. There were numerous allegations that the first fight was fixed. The second fight proved to be even more controversial, as Ali downed Liston in the first round of the fight with a phantom punch that many in the audience did not see him execute.

The picture of Ali standing over Liston and yelling “Get up and fight, sucker!” is one of the most iconic pictures in history. 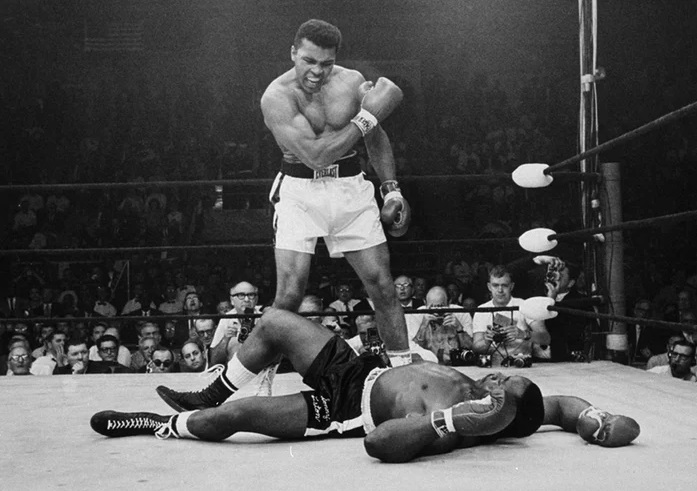 Ali was becoming a controversial figure by this time for much more than his antics outside of the ring. He joined the Nation of Islam during the height of the Civil Rights Era. The Nation of Islam was viewed as a potentially dangerous black separatist organization. Ali’s affiliation with the Nation of Islam seemed to many to be at odds with mainstream American values.

Despite Ali’s incredible achievements at this point in his young life, his greatest fights were yet to come.