The Life and Times of Muhammad Ali: Part 2 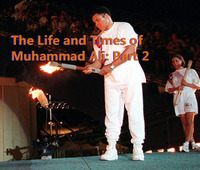 Stance on the Vietnam War

On April 28, 1967, Muhammad Ali refused to be inducted into the United States Military. He was promptly arrested and the New York State Athletic Commission suspended his boxing license. His heavyweight title was immediately stripped from him by the World Boxing association. This effectively eliminated his eligibility to box in the United States.

His reasoning for refusing to join the U.S. armed forces was religious. He stated that his religion, Islam, forbade him from taking part in any wars that killed other human beings. He also famously said, “I ain’t got no quarrel with those Vietcong.”.

He was tried and convicted of draft evasion on June 20, 1967. This resulted in a 5- year prison sentence, a $10,000 fine and a 3-year ban from boxing. Ali’s lawyers filed an appeal that was summarily denied. Ali appealed the decision again and was able to avoid going to prison until a final decision could be made by the United States Supreme Court.

During this time Ali was a pariah to the establishment, mainstream American public opinion and even within much of the black community. Many black people feared that during a time when they were making great strides in civil rights, their plight would be blighted if one of their most prominent members was refusing military service while thousands of young American men across the land were fighting and dying on behalf of their country in Vietnam.

Famous black athletes of the day like Jim Brown and Kareem Abdul Jabbar met with Muhammad Ali in a closed door session to try to understand why he would reject an opportunity to fight in the United States Armed Forces. Ali reiterated that he would not be joining the ranks of the U.S. military and stood his ground. An excerpt of a press conference held in the aftermath of that meeting is shown in the video below:

(Note: He changed his name to Muhammad Ali years before this case came into existence. However, the United States Government still referred to him as Cassius Clay.)

Muhammad Ali’s appeal reached the highest court of the land, the United States Supreme Court. At issue was the draft board’s rejection of Ali’s application for conscientious objector status. In a unanimous 8-0 decision, Ali’s conviction was reversed.

Though Ali was once again triumphant, he paid a heavy price. He lost all of his money and was flat broke by the time his draft ordeal concluded. He had become the most reviled man in the United States. Ali was exiled from boxing for over 3 years, years that many believe would have been his peak years as a fighter. The likelihood that he would have a successful second act was, at best, unlikely.

Ali was able to return to boxing shortly before the Supreme Court decided Clay v. The United States in his favor. In the state of Georgia, there was a loophole that Ali and his representatives were able to exploit in their favor. The state had no boxing commission. Ali fought Jerry Quarry in Atlanta, defeating him by knockout in 3 rounds. 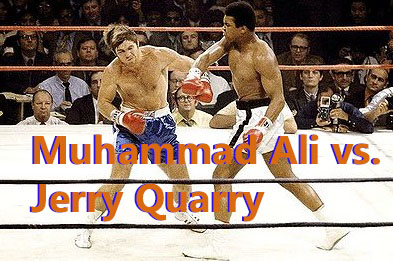 Ali had his eyes on the big prize. He felt that the Heavyweight Championship of the World belonged to him. Though he did not have the belt, he was outspoken about his sentiment that he was the real Heavyweight Champion and the current title holder was an imposter. The Heavyweight Champion of the world at that time was the great “Smokin’” Joe Frazier. Both men would meet each other in a contest that would go down in history and, in some ways, define them for the rest of their lives.

Fight of the Century

Otherwise known as “The Fight” or “Frazier vs. Ali 1”, March 8, 1971 is undoubtedly a hallmark moment in the history of sports. The bout between Joe Frazier and Muhammad Ali stands as the most anticipated fight of all time. Many sports writers consider it the greatest sporting event of the 20 th Century. 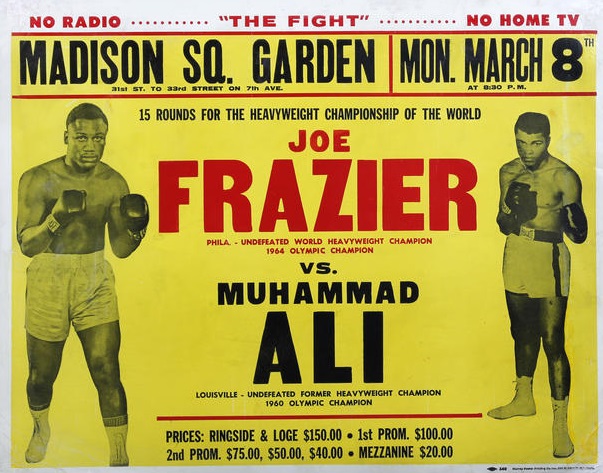 The hype surrounding the fight was multi-layered: 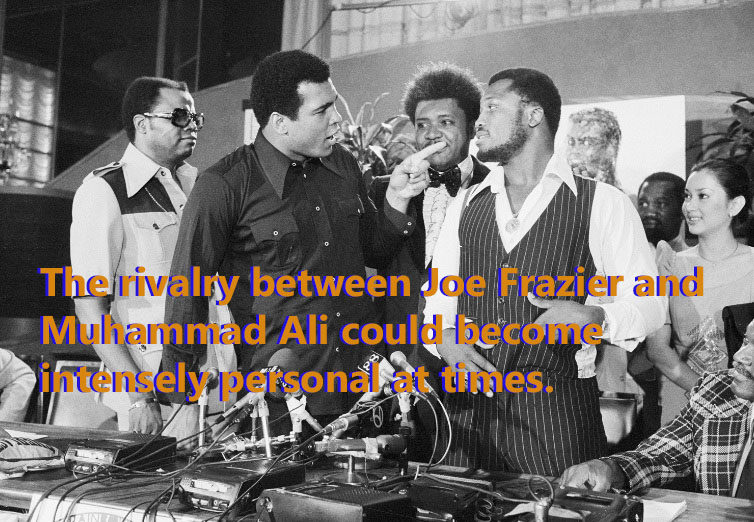 The fight proved to be superior to the great hype surrounding it. Ali and Frazier went on for the full 15 rounds. Though Ali commanded the bout during the first three rounds, Frazier outperformed him throughout the majority of the rest of the fight. Frazier’s legendary left hook made several successful appearances. This culminated with an amazing left hook that knocked Ali off of his feet in the 15 th round of the fight. As Ali rose quickly to his feet his jaw was very swollen. When the fight was over, “Smokin’” Joe Frazier was the victor. Frazier handed Ali the first loss in his professional career.

This was an amazing fight. Both men provided the world with a performance that will live on throughout history for untold generations to come. One can not possibly do this fight justice by merely describing the high points. Muhammad Ali vs. Joe Frazier 1 is shown in its’ entirety in the video below:

Ali would defeat Joe Frazier in a rematch held in January of 1974. A third rematch, titled the “Thrilla in Manila” was held in the Philippines in 1975. Ali was the victor of that fight as well. That fight marked the end of their professional contests. These fights did not rally the public in the same way that The Fight of the Century did. Though Muhammad Ali has earned the title of “The Greatest”, Joe Frazier’s defeat of Ali has secured his place in the ranks of the all-time greats in boxing history. In truth, Joe Frazier is one of the greatest of the greats.

On October 30, 1974, Muhammad Ali met Heavyweight Champion of the World George Foreman in another legendary boxing match dubbed “The Rumble in the Jungle”. This fight was held in Kinshasa, Zaire (now known as Democratic Republic of the Congo).

The great George Foreman established a reputation of invincibility by this time due to the fact that he demolished his opponents in short order. Foreman was a huge and unbelievably powerful man with boxing skills that complemented his imposing physique. By this time, Ali was generally viewed as a has been. Though he could still compete at a professional level, he lost some of the spring in his step. He wasn’t as fast or seemingly as powerful as he was in his younger days.

Foreman was a powerhouse. He was younger than Ali and undoubtedly much stronger. He dispatched Joe Frazier in 2 rounds to take his Heavyweight Title away from him in a match held on January 22, 1973. Being that he managed to do in 2 rounds what Ali could not do in 15 rounds, many assumed that Ali was headed for certain defeat.

In one of the greatest upsets in boxing history, Ali defeated George Foreman in the eighth round of the fight. Instead of trying to challenge Foreman’s incredible power, Ali employed a strategy that he called “rope-a-dope”. This strategy involved allowing Foreman to pin him to the ropes and fire off punches that Ali would absorb through a combination of defense and endurance. As a result, Foreman’s onslaught led to the intrepid champion tiring himself out. Becoming too exhausted to mount an effective assault on Ali or defend his position, Foreman fell victim to Ali’s counterattack. The gallant champion fell to The Greatest when Muhammad Ali knocked him out and the fight was stopped 2 seconds shy of the end of the 8 th round.

George Foreman would go on to reclaim the Heavyweight Championship of the world on November 5th, 1994, at the age of 45 years and 360 days.

Loses and regains his title (again)

Muhammad Ali lost his title to 1976 Olympic Boxing Gold Medalist Leon Spinks in 1978. Seven months later, he regained the title in a rematch. Following this, he announced his retirement.

In 1980, Ali came out of retirement to fight Heavyweight Champion Larry Holmes. Larry Holmes was Ali’s friend and former sparring partner. Holmes defeated Ali with a punishing flurry of blows. Ali was knocked out by Holmes in the 11 th round.

Holmes loved and admired Ali and did not want to fight him. Throughout the bout he would repeatedly ask Ali to relent because Holmes did not want to cause physical injury to him. Ali refused and Holmes had no choice but to aggressively defend his title.

(Side note: History has not elevated Larry Holmes to the status that he deserves in the public domain. Larry Holmes – nicknamed the “Easton Assassin” due to his roots in Easton, Pennsylvania – is ranked as one of the greatest heavyweights ever. Another champion fighter with multiple gaps in his teeth, he is inducted in the International Boxing Hall of Fame and the World Boxing Hall of Fame. He retired in his early 50s with a record of 69 wins and 6 losses.)

It was around this time that Ali’s Doctors, friends and family pleaded with him to retire. He was beginning to slur his speech and slow physically. Despite their efforts, Ali fought again.

In 1981, Muhammad lost his final fight to Trevor Berbick. He finally retired. He achieved a record of 56 wins and 5 losses during his storied professional career.

Ali would earn the world’s adulation once again in 1996 when he lit the Olympic torch, signifying the beginning of the 1996 Summer Olympic Games in Atlanta, Georgia. It was a special moment. By now, millions of people had come of age that were too young (or not even born) to appreciate his accomplishments when he was in the prime of his health. By 1996, his legend had grown even larger than it was during the 1960s and 1970s.  He fought off the uncontrollable shaking brought on by his continually progressing Parkinson's Disease and lit the Olympic Torch flawlessly.  It was a special moment for his generations of fans. 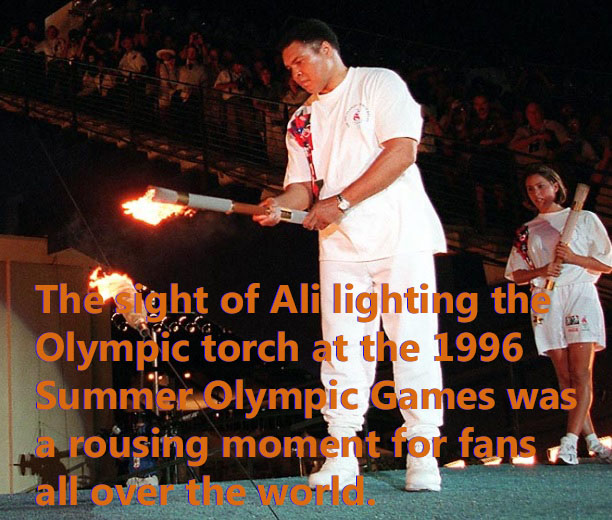 He also received a replacement Gold Medal for the one that he threw in the Ohio River back in 1960.

Wins the Presidential Medal of Freedom

Muhammad Ali was one of the recipients of the Presidential Medal of Freedom in 2005. President Bush cited Ali’s reputation as a braggart. He went on to say that he learned from Ali that “It’s not bragging if you can back it up.” 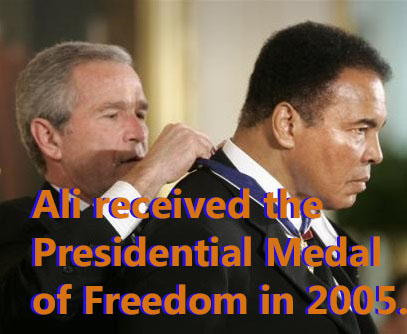 Despite the progressive nature of his illness, Ali managed to donate time throughout the years to countless humanitarian causes. He visited sick children in hospitals and urged calm in the aftermath of the September 11 th attacks. 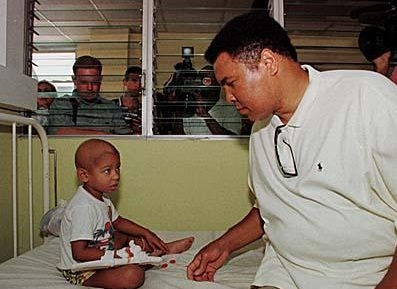 More recently, Ali assisted in freeing Jason Rezaian, an American journalist imprisoned in Iran. Ali issued a statement in March of 2015 calling for his release. Ali is revered in Iran for having the courage to stand up for his Islamic religious beliefs and the values of human rights.

Rezaian, who is now free and back home in the United States, says that once Ali vouched for him the prison guards treated him with more respect.

On June 4, 2016, the world learned that Muhammad Ali died due to complications from a respiratory illness.

Muhammad Ali was a trailblazer for athletes speaking on political issues. He is rightfully regarded as a visionary. His stance on the political issues of the day, though controversial at the time, have been widely accepted as correct. This is evidenced by the fact that the cause of equal justice for all is an ideal that the citizens of the United States continue to aspire toward. We live in a far less bigoted society today than the one that Muhammad Ali came of age in during the 1940s, 1950s and 1960s.

If you are reading this, you probably came to our site in search of a remedy for the gaps in your teeth. If so, you have something in common with Muhammad Ali. He, too, had a gap in his teeth.