What is an X-Ray?

What is an X-Ray? 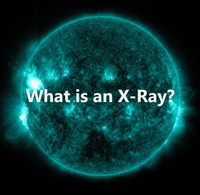 An X-Ray is a type of electromagnetic radiation that has revolutionized the health care profession since its’ discovery in the late 19 th century. The applications for these rays in health care and industry are numerous and varied. We take this tool for granted in present-day life. However, for the majority of human existence there was no knowledge of the existence of this type of radiation. If you can imagine a Doctor trying to diagnose a metastatic malignancy without X-Rays, you will quickly understand the tremendous advantages that they provide.

X-Rays are characterized by very short wavelengths and high frequencies. The reason why we see things is because the visual light spectrum that humans are able to visualize is reflected off of many different types of surfaces. X-rays pass directly through much of the world around us and are absorbed by dense materials. Hard organic matter is one of many types of substances that absorb X-Rays.  X-Rays illuminate the surfaces that absorb them.

X-Rays are very similar to light rays, but they have a wavelength that is 1/1000 th as long as that of light. When a material object is impacted by a cathode ray, an X-ray is produced.

Wilhelm Conrad Roentgen discovered the X-Ray. He was a professor of physics in Germany. Though X-rays had been observed by others before him, he was the first person to systematically study them and see their potential in numerous scientific applications. In 1901, he won the Nobel Prize in Physics for his discovery. He is the first recipient to ever receive the award. 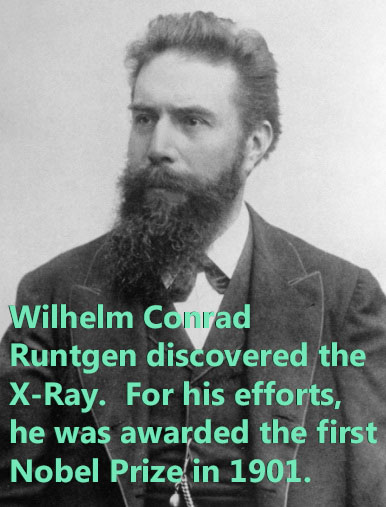 In the years immediately following the publication of his findings, the wavelengths were referred to as Roentgen-rays. Roentgen himself preferred to call them X-rays. The name stuck and remains the common name for this wavelength to this day.

Invention of the first X-Ray Machine

The officially recognized date of discovery for X-Rays is November 8 th, 1895.

Like many scientific discoveries, Roentgen discovered X-rays while performing research on an entirely different subject. He was studying the effects of cathode rays when he noticed a peculiar event.  At very low pressures, when he was passing electric current through gases and out of a discharge tube; he observed rays illuminating during the process. Roentgen’s wife is the first known person to undergo the deliberate procedure of being examined with an X-ray procedure. Roentgen was able to create an image of the inner mechanics of his wife’s hand, the first time that such a feat was ever accomplished in history. 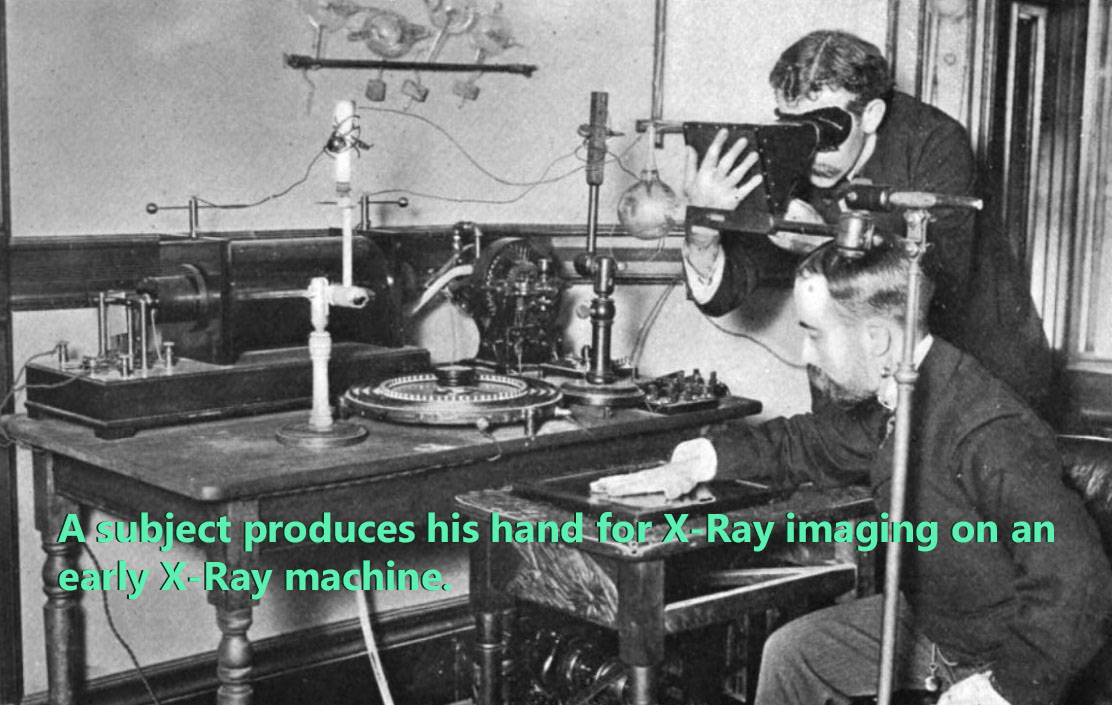 (This picture shows a man providing his hand for view through an early X-Ray machine called a Crookes tube. Circa 1898.)

The discovery of X-Rays is one of the most important scientific achievements in human history. Unlike other discoveries in the sciences, X-Rays were immediately embraced upon their revelation to society. Only 1 month after Roentgen made his first observation, the rays were being used in medical practice. The first documented case where an X-Ray was used to treat a medical emergency was in 1896 in Naples, Italy. An Italian soldier had been shot during a military campaign that Italy had launched against Ethiopia. Doctors used a primitive X-Ray machine to locate the bullets that had lodged in his body.

X-Rays have had a widespread effect on human societies around the world. In the past, Doctors had to diagnose patients with internal injuries and ailments from disease by surmising what was going on inside of their bodies with no clear visualization as to the root source of the problem. Today, Doctors can accurately diagnose cancerous tumors and broken bones with pinpoint precision. As a result, treatments for these maladies have advanced exponentially; X-Rays have been used to provide an additional visible medium for health care assessments.

Doctors now had an opportunity to see the human brain and heart while it was intact and fully functional inside of living human beings.

A Radiographer is a medical professional that specializes in the use and interpretation of results from an X-Ray Machine. A Doctor then takes these findings under advisement and pursues a course of corrective treatment. 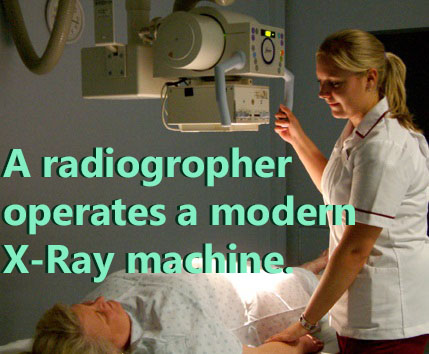 (X-Rays are also known as Radiographs.)

X-Rays are an essential tool for dentists. They allow dentists to assess the health of a patient’s teeth and jawbone. With X-Rays, dentists are not only able to gain additional information about known dental health problems; they are also able to detect dental problems before they become serious.

The mouth and gums are soft tissue areas. As such, X-Rays are able to pass directly through them and travel onto the teeth. The hard surfaces of the teeth absorb X-Rays; these structures glow when X-Ray images are produced.

X-Rays are used to monitor growing teeth in young children, assess whether or not a patient has any signs of periodontal disease, examine the roots of the teeth, evaluate the health of the jawbone and uncover the existence of cavities. Much of what goes on with the dental health of a patient occurs inside of the structures of the oral cavity. X-Rays are of crucial importance in uncovering problems before extreme treatment methods are necessitated.

Early X-Ray machines gave users a toxic dose of radiation. While most did not suffer extreme effects like cancer and premature death, many received radiation burns and lost their hair.

Over a century after the first X-ray machine experiments, one of the very first X-Ray machines was discovered. It was noted that the radiation dose emitted from this machine was on the order of 1,500 times greater than the dosage that is produced by today’s machines. Additionally, early machines could take up to 90 minutes to produce an image. Today’s machines only require 20 milliseconds to achieve full imagery 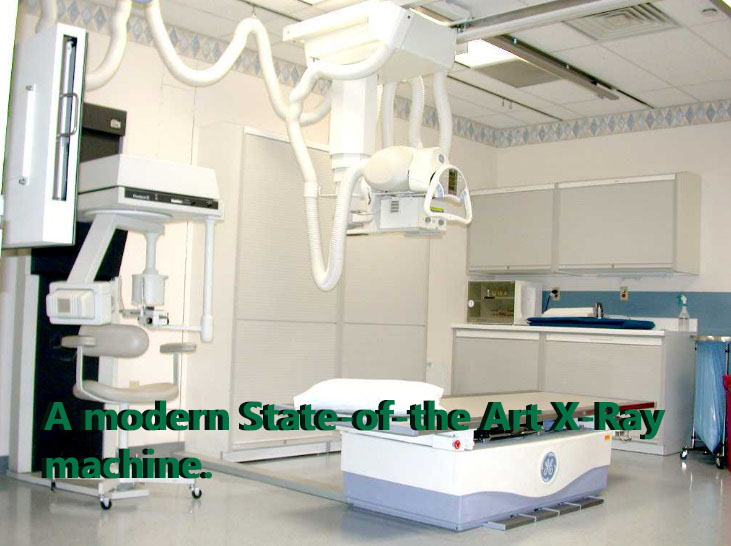 Modern X-Ray machines emit extremely low doses. There is no danger of developing Acute Radiation Syndrome from these devices. The reason why Dentists leave the room when they are performing X-Rays on patients is because they are activating these machines several times per day, every working day for their entire careers. Over time, this type of exposure adds up. Still, the levels of radiation produced are so low that most experts believe that the likelihood of an adverse event from continued exposure to this type of radiation by medical professionals is very low.